The first eReaders with color E ink displays are starting to arrive.

Earlier this month the Onyx Boox Poke2 Color went on sale for $299, and now there’s a more affordable option. Newegg is selling the PocketBook Color for $229. 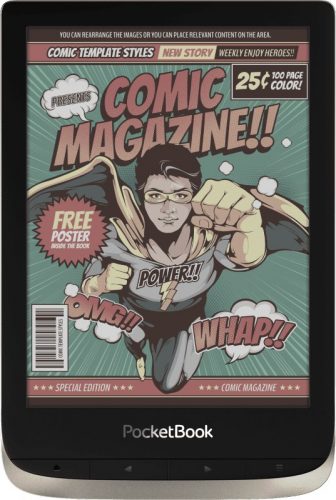 Both devices feature 6 inch displays that use E Ink’s Kaleido display technology that uses a color filter to display up to 4,096 colors.

Like all E Ink screens, Kaleido displays are low-power screens that only consume energy when text or images are changed. They don’t require a backlight, and can often be easier to view in direct sunlight or other brightly lit environments, unlike many other displays.

But there are some down sides to color E Ink. Kaleido displays can show 300 pixels per inch when using just 16 shades of grey. But that drops to 100 pixels per inch when viewing color graphics. Early reviews also suggest that there’s an always-present “screen door effect” that means that if you look closely you’ll see small lines between the pixels.

That’s probably fine if you expect periodicals, textbooks, and digital comic books to look like newsprint rather than high quality paper. But it could be distracting when reading black and white text.

Anyway, that’s also a good reason why it’s nice to have a cheaper option. If you’re not willing to pay $299 for a device with imperfect color reproduction, maybe $229 is a little easier to swallow.

The PocketBook Color has a 1 GHz dual-core processor, 1GB of RAM, 16GB of internal storage, and a 1900 mAh battery. The display features a resolution of 1072 x 1448 pixels (in greyscale mode) and support capacitive touch input. There’s a frontlight to help you see in dimply lit environments.

Other features include WiFi and Bluetooth, a micro USB port (seriously?) and a microSD card reader (with support for cards up to 32GB).

The eReader runs a custom operating system based on Linux 3.10.65 and supports a variety of eBook formats including EPUB and PDF files (with DRM), and DRM-free MOBI, TXT, DOCX, CBR, CBZ, and HTML files, among others. There’s also support for playing MP3 or OGG audio files and the system supports text-to-speech in 15 languages including English.

If you do have more money burning a hole in your wallet, the $299 Onyx BOOX Poke2 Color has a faster processor, twice as much memory and storage, and an Android-based operating system that makes it easy to install third-party apps.

But given the limitations of color E Ink, I can’t help but wonder if many readers might not be better off spending $90 on an Amazon Fire HD 8 tablet with a color LCD display. You can use the money you’d save to buy a Kindle Paperwhite or any number of other pretty good eReaders with black and white ePaper displays.