Global PC shipments were down during the first quarter of 2020 due to supply chain issues, but they more than bounced back in the second quarter, as customers snatched up computers for working and learning from home.

Canalys reports that overall tablet shipments were 26-percent higher than during the same period a year earlier. By comparison, Canalys says PC shipments were only up 9 percent year-over-year. 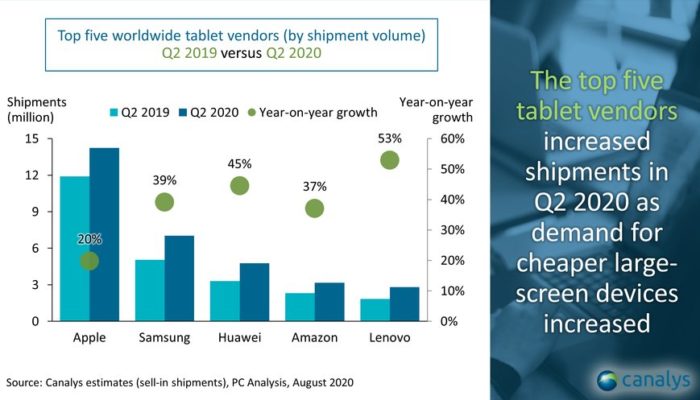 To be clear, PCs are still more popular than tablets. According to Canalys, there were nearly twice as many PC shipments in Q2, 2020 than there were tablet shipments. But tablets seem to be growing faster than traditional PCs.

According to Canalys, that’s likely because the tick a lot of boxes for customers at a time when so many of us are working from home or participating in online learning.

You can use them to read textbooks and other documents, participate in video conferencing and collaboration sessions, or some models also let you use a pen or keyboard to get work done.

Entry-level tablets like Amazon’s Fire tablets are generally a lot cheaper than a typical PC, which makes it easier to buy multiple devices so that each member of a household can have their own device.

Of course some high-end tablets like Apple’s iPad Pro lineup are basically PCs with a custom tablet-friendly operating system.

Speaking of Apple, the company continues to dominate the tablet space, with a 38-percent market share, according to Canalys. Samsung comes in a distant second place, with less than 19-percent of the market. Huawei, Amazon, and Lenovo take the rest of the top 5 spots.