After beginning a rollout of a major new version of Firefox for Android in July, Mozilla has announced that the new app is now widely available in Europe, and coming to North American uses on August 27th.

Technically, the new web browser is Firefox 79. But Mozilla is calling it “Firefox Daylight,” since it represents a major design overhaul and user experience changes. It’s the first stable update to Firefox for Android since version 68 and incorporates a year’s worth of updates. 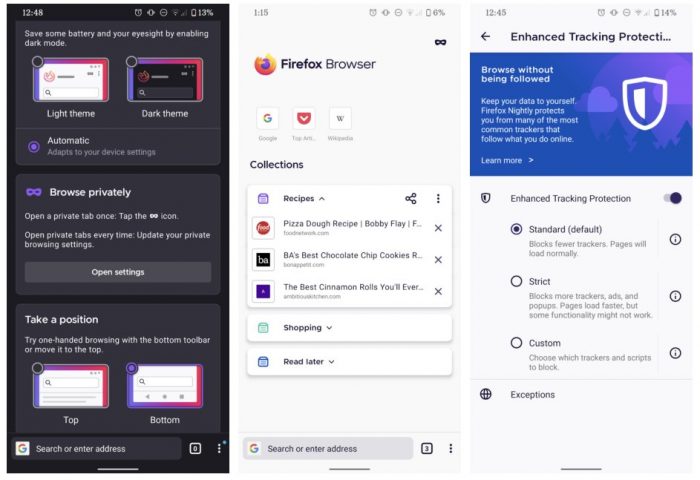 The user interface has been changed so that tabs can be displayed on either the top or bottom of the screen. There’s support for grouping multiple tabs into collections. And there’s support for picture-in-picture video.

Mozilla has also added support for performing a voice search from the address bar. Enhanced Tracking Protection is set to strict mode by default. And there’s quicker access to Firefox Private Mode from the home screen.

But if you’ve been using an older version of Firefox for Android and making use of its support for third-party add-ons, you may want to disable automatic updates… because Firefox 79 only supports a handful of add-ons.

In fact, as Android Police points out, as of late July, 2020, only 9 add-ons are supported:

Mozilla says more add-ons should be supported in the future. But Firefox 68 supported literally thousands of third-party add-ons, which means that “upgrading” to the latest version of Firefox could kill functionality for some users.

This isn’t a huge surprise to folks who’ve been keeping an eye on development of the open source web browser. Mozilla has been testing many of the changes incorporated in Firefox 79 in Firefox Preview and Beta browsers that had been available as separate downloads. But now that those changes are being incorporated into the stable version of Firefox, it means that more users are likely to get all the new features… and have support for extensions and other add-ons severely restricted.

If you’d like to avoid an automatic update, you can follow our guide for disabling Android app auto updates.