For example, the Western Digital Red line of hard drives are designed specifically for use in NAS (Network Attached Storage) devices… but in some cases a NAS will run more slowly if it’s using SMR drives. So many people were understandably upset when they discovered that the WD Red hard drives they’d purchased for a NAS were using SMR technology despite WD not having acknowledged that.

Class action suits have been filed. And now Western Digital is responding… by introducing a new line of WD Red Plus hard drives that will only use CMR technology. WD Red will continue to use the potentially slower SMR tech. 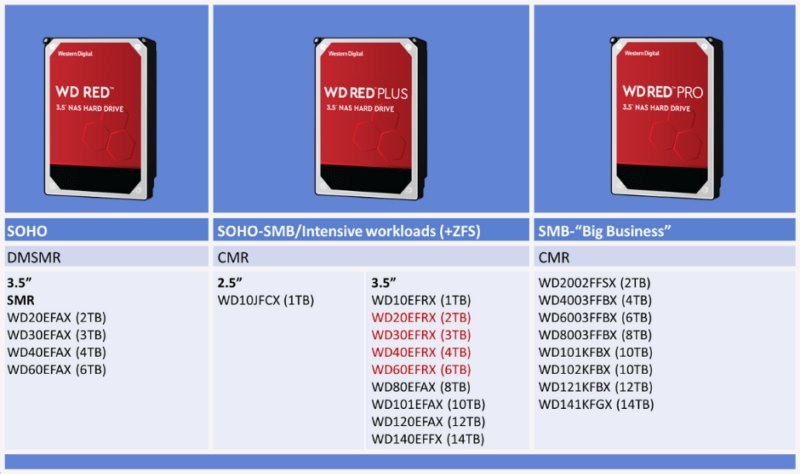 While the company says SMR technology is appropriate for most small office and home use companies, WD does acknowledge that there are certain situations where CMR performs better.

For example, SMR can be slower with sustained random write performance, which means, among other things, that it can take much longer to rebuild a RAID drive if it’s using the ZFS file system.

So the good news is that, moving forward, customers should be able to figure out whether they’re buying a disk that uses SMR or CMR technology by looking at the branding. The bad news is that WD didn’t make this distinction earlier. Instead the company just began quietly shipping some SMR disks that were labeled identically to CMR parts. Right now there’s no way to know which type of storage the WD Red drive on a store shelf uses.

As Ars Technica points out, Toshiba and Seagate have also been quietly sneaking SMR drives into their product lineup. But neither of those companies does that with drives that are specifically targeted at NAS applications, where the performance difference is likely to be most visible.

And if you’re wondering why WD and other hard drive makers are continuing to make HDDs that use SMR technology at all, it’s apparently cheaper to manufacture and makes it easier to hit higher storage capacities.

via Tom’s Hardware and Ars Technica