The new chips also support devices with cameras up to 16MP and offer optional support for 4G LTE.

Qualcomm says we can expect the first devices with Snapdragon Wear 4100 series processors to begin shipping within the next month. 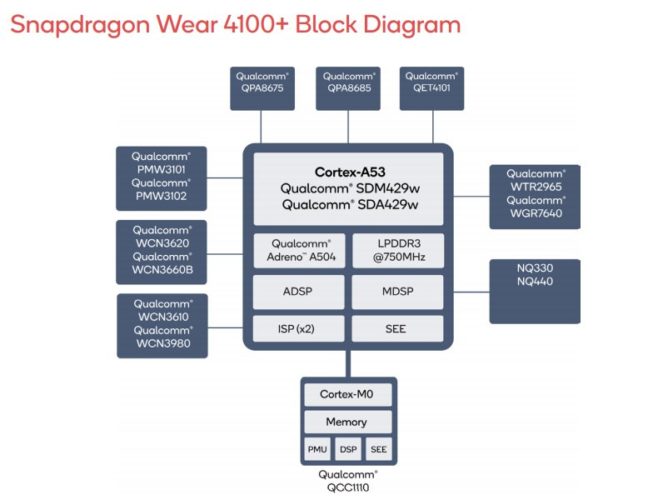 The Snapdragon Wear 4100 series processors are 12nm chips that feature:

Qualcomm says the chips offer up to an 85 percent performance boost and up to 25-percent longer battery life than similar devices powered by the older Snapdragon Wear 3100 chip, which is a 28nm processor with ARM Cortex-A7 CPU cores. Other new features include support for Bluetooth 5.0 (up from BT 4.2), and dual displays and/or 1080p displays (up from 640 x 480), and

Snapdragon Wear 4100 series chips can handle 1080p video capture at up to 30 frames per second for wearables with cameras. And the Adreno 504 GPU supports OpenGL ES 3.1 graphics.

If you’re wondering what sets the Snapdragon Wear 4100+ apart from the version without a mathematical character in its name, it’s the inclusion of an AON (always-on) co-processor that allows certain activities to be offloaded to a low-power secondary chip including:

Qualcomm says the result is that these things can run more quickly and smoothly on a device with the co-processor. The company says the new co-processor also offers support for up to 64 thousand colors, unlike its predecessors which were capped at 16 colors.

Device makers including Movoi and imoo have announced plans to bring smartwatches with Snapdragon Wear 4100 chips to market in the coming months, but we’ll likely hear from bigger names in the future.