One Netbook plans to begin taking pre-orders for their next mini-laptop on June 29th. The One GX1 is a little computer with a 7 inch FHD touchscreen display, a QWERTY keyboard, 4G and/or 5G support, and support for detachable game controllers that let you hold the computer like a cross between a Nintendo Switch and a, well… laptop.

According to One Netbook, some of the first folks who pre-order the One GX1 will get a set of game controllers for free when the mini-laptop begins shipping August 8th. That suggests that you’ll have to pay extra for the controllers at some point in the future.

Another thing to keep in mind? The version of the One GX coming this summer may not be your best option if you’re looking for a mini gaming PC. It will ship with an Intel Core i5-10210Y processor featuring Intel UHD graphics. If you want a version with a next-gen Intel Tiger Lake-Y processor and Intel Xe graphics, you’ll have to wait. 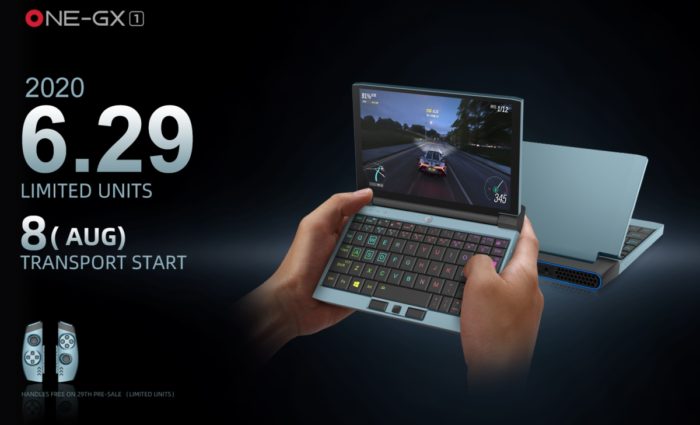 Anyway, One Netbook tells me the Tiger Lake version, which will be known as the One GX Pro, will go on sale in the second half of 2020, although an exact date hasn’t been revealed yet. Pricing has been announced yet either, but in China the One GX1 is selling for about $785 during pre-orders.

The version scheduled to ship in August has the design of a gaming system, including dual copper heat sinks, dual fans, and a large (and familiar-looking) rear exhaust system, and support for those optional controllers that can be attached to the side of the laptop or used wirelessly. It also has an RGB backlit keyboard.

But the computer’s Core i5-10210Y processor means that it’ll offer around half the performance you’d get from a Core i5-1035G7 chip in competing devices like the GPD Win Max.

I know a lot of folks are more interested in using the One GX as a general purpose computer than a gaming machine though, particularly since it’s expected to be one of the first modern mini-laptops to support cellular networks. Unfortunately One Netbook isn’t ready to announce which 4G and 5G network bands the system supports, so it’s unclear how useful the cellular capability will be for customers outside of China.

Here’s a run-down of key specs for the the One GX1 and the upcoming One GX Pro (with Tiger Lake).

OneGx1
World’s smallest cloud gaming PC compatible with 4G / 5G LTE👏
It is highly recommended for those who want to use the Internet on a computer 👏👏👏👏👏👏👇👏👇👏 pic.twitter.com/YGOMy2rhaf

13 replies on “One GX pre-orders begin June 29, the mini-laptop should ship in August”