Lenovo’s ThinkPad X1 Fold will be one of the first laptop/tablet hybrids with a flexible OLED display when it ships this summer. But it’s expected to sell for $2500 and up.

Now it looks like Lenovo may have a more affordable option for folks that want a big foldable tablet.

An unannounced Lenovo Yoga dual screen laptop makes an appearance in a leaked presentation shared by WalkingCat on Twitter. 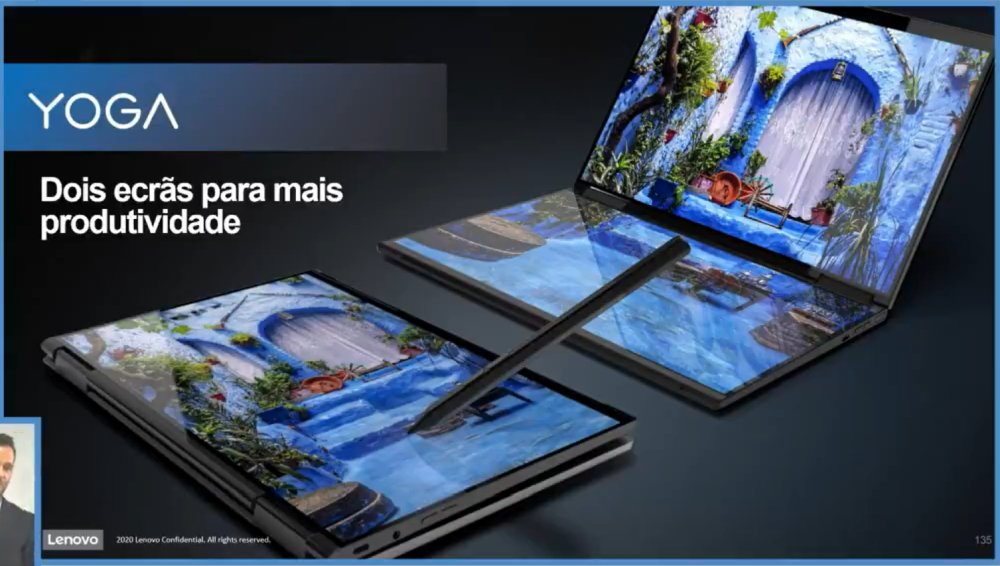 Unlike the ThinkPad X1 Fold, which has a single display with a flexible design that allows it to fold in half, the Yoga dual screen devices appears to have two touchscreen displays connected at the center by a hinge.

This allows you to open the system up like a tablet (with a line down the center), or use it like a laptop (with the bottom area used for writing, drawing, or text input, and the top functioning as a display).

Like Microsoft’s upcoming Surface Neo dual-screen tablet, the Lenovo Yoga dual screen device also seems to work with an optional keyboard add-on, which can be placed atop part of the lower screen for tactile feedback while you type (something you didn’t really get when using some of Lenovo’s earlier dual-screen tablets).

According to the presenter in the video, Lenovo plans to release this new dual-screen tablet in 2021, suggesting that it could ship with Windows 10X, Microsoft’s upcoming operating system that’s designed for both single-display and dual-screen devices.

Lenovo and Microsoft aren’t the only company working on devices in this category. Dell also showed off a set of foldable computer prototypes earlier this year and Asus and HP have also said they’re working on dual-screen systems that will run Windows 10X.