Hardkernel’s latest mini PC is a 4.3″ x 4.3″ computer board featuring an Intel Celeron J4115 processor, support for up to 32GB of dual-channel RAM, and support for PCIe NVMe, SATA, and eMMC storage.

The little PC board is available for pre-order for $119. 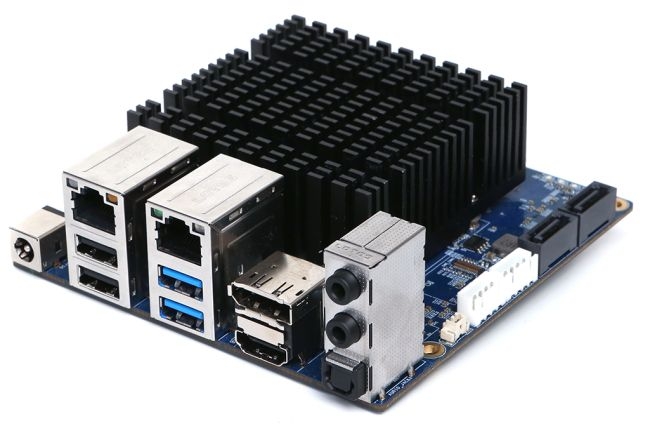 That price doesn’t include a case, memory, or storage — the ODROID-H2+ is more of a compact PC motherboard than a Raspberry Pi-like single-board computer. But the specs paint a picture of a pretty versatile system for folks that want to assemble their own NUC-like computer:

Hardkernel says the ODROID-H2+ can handle up to two 4K UHD displays with refresh rates of 60 Hz simultaneously. It also features support for Wak-eon-LAN functionality, works with an optional HDMI-CEC board (sold separately), and comes with a passive heatsink for fanless operation. You can connect a fan if you’d like active cooling though.

The ODROID-H2+ is an update over the original ODROID-H2 which launched in 2018. That model has similar features, but it’s powered by an older Celeron J4015 Gemini Lake processor.

The new Celeron J4115 chip isn’t listed on Intel’s website yet, but it’s a 10 watt quad-core/quad-thread processor with Intel UHD 600 graphics and top speeds of 2.5 GHz for single-threaded performance or 2.3 GHz for multi-threaded tasks.

It also happens to be the same chip that powers the Chuwi LarkBox mini PC that I’ve got sitting on my review desk at the moment. I’ll have more details on the LarkBox’s performance soon, but here are a few preliminary benchmark results:

The ODROID_H2 officially supports Ubuntu Linux, but with an Intel x86 processor, it should also be compatible with Windows or just about any other operating system you might want to throw at it.