The next inexpensive, Linux-friendly device from Pine64 is coming soon.

The company already sells a $100 PineBook laptop and a $200 PineBook Pro. Early batches of the $150 PinePhone are available for customers willing to invest in beta hardware. And now Pine64 says it’ll begin taking pre-orders for its $100 PineTab Linux tablet later this month.

Update 6/10/2020: The PineTab is now available for pre-order from the Pine64 Store, and the tablet should begin shipping in late July 2020. 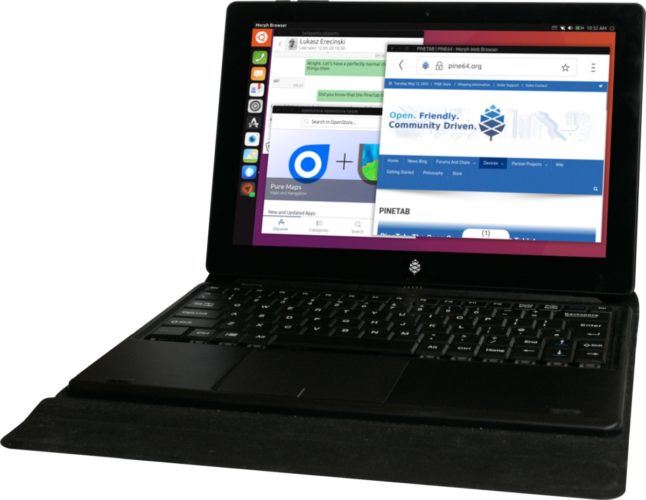 Pine64 announced plans to build an inexpensive Linux tablet in early 2019. But the PineTab project was delayed so the company could prioritize its laptops and smartphone… and then delayed again due to the impact of the COVID-19 pandemic on factories in China.

It’s worth noting that customers who want to get in on the early batch will essentially be buying beta hardware. So if you want to make sure you get the most bang for your buck, you might want to wait for a later batch. But did I mention that it’s a Linux tablet that will cost just $100?

Here’s an overview of the hardware:

The tablet is also designed to work with an optional $20 keyboard case that attaches magnetically and features backlit keys.

And that optional M.2 SSD adapter board is just one of several optional add-on modules that Pine64 plans to offer. The company is working on:

You’ll only be able to use one of these adapters at a time, and you’ll have to open the case to install one. But it should be pretty easy do that, since Pine64 says you can open the case by removing a single screw holding the back cover in place.

In fact, you can install a board with multiple components (storage and LTE, for example), but the company says you’ll only be able to use one at a time.

When it comes to software, the PineTab should be able to run just about any operating system that works with the PinePhone, since the two devices have similar hardware. At launch, Pine64 says it’ll ship the tablet with the Ubuntu Touch operating system developed by UBPorts, since it can automatically switch between a touch-friendly tablet user interface and a laptop/desktop-style US when a keyboard is attached or disconnected. But the tablet should also be able to support other operating systems.

Speaking of PinePhone software, you can read more about the latest developments on that front in Pine64’s May update. Among other things, developers have been working on a multi-boot solution that would allow you to load several operating systems and choose between them at startup, and you can now make phone calls when running Sailfish OS or Nemo Mobile.

Pine64 has also announced that it will be adding support for Qi wireless charging soon, through an optional add-on kit that should ship this summer.

Other highlights from the Pine64 May update include: