During this week’s MS Build developer conference, Microsoft described a bunch of new features coming to its Edge web browser.

Among other things, that means new tools for developers, improved support for Progressive Web Apps, and new data synchronization and customization options for IT professionals.

The company is also adding built-in Pinterest integration to the browser for some reason. 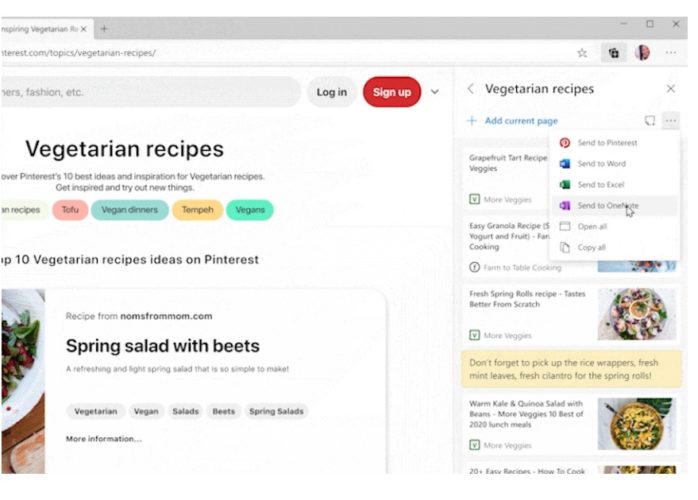 Don’t get me wrong, the ability to save recipes, how-to articles, or home design websites to your Pinterest collections could certainly come in handy… for folks that use Pinterest. But it’s not like Pinterest is ubiquitous and/or a Microsoft product.

A “send to OneDrive” option makes sense, because Microsoft owns OneDrive. But Send to Pinterest just feels like product placement for a third-party service (sort of like the save to Pocket built into recent versions of Firefox).

Anyway, the a preview of the new Send to Pinterest feature will be available to members of the Edge Insider program sometime within the next month, and it will likely roll out to all users later this year. Also new? That aforementioned send to OneNote option.

Both new features will be part of the Edge web browser’s Collections feature, where they’ll join the options to send content to Excel or Word.

In other Edge news, The Verge notes that you can finally keep your browser extensions synchronized between multiple devices running Edge.

The latest stable build of Edge, which was released this week, adds support for extension synchronization. Just make sure you’re logged into your Microsoft account on all devices where you’re using the browser, and installing an extension or add-on on your work PC, for example, means that it will automatically be installed on your home PC next time you open the browser.

There’s still no support for tab or history sync though, so when it comes to data synchronization, the Chromium-based Edge web browser is still trailing Google Chrome, Mozilla Firefox, Apple Safari, Vivaldi, Opera, and most other modern web browsers.

One reply on “Microsoft is adding Pinterest to Edge, whether you want it or not (but at least you can sync extensions now)”