The GPD Win Max is a mini gaming laptop with an 8 inch touchscreen display, built-in game controller buttons, and a QWERTY keyboard that’s just large enough to make touch typing possible. It’ll go up for pre-order for $779 through a crowdfunding campaign set to begin on May 18th, but GPD sent me a pre-production unit to test.

While this little computer is clearly designed with gaming in mind, the inclusion of a keyboard opens the possibility of using the Win Max as a multi-purpose computer. And you can certainly use it as one. In fact, earlier today I wrote an article for this website using the Win Max. 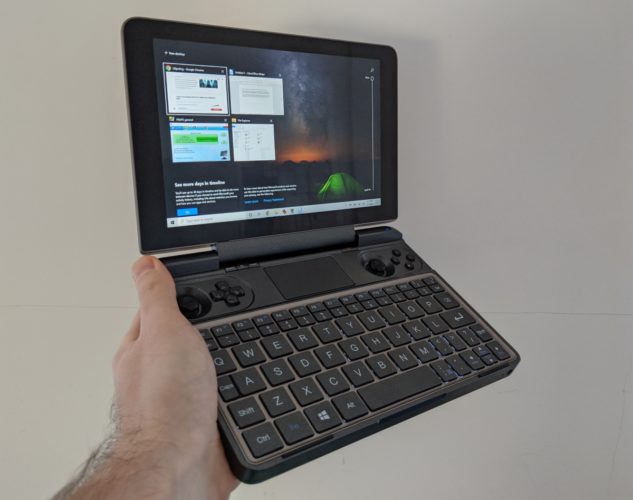 But it wasn’t the most pleasant experience. The computer’s small display makes it difficult to open multiple windows at once. And GPD made a bunch of compromises in order to fit 75 keys on the keyboard. You can use the Win Max to type long documents… but it would probably be a lot easier to do on a laptop with a larger keyboard. 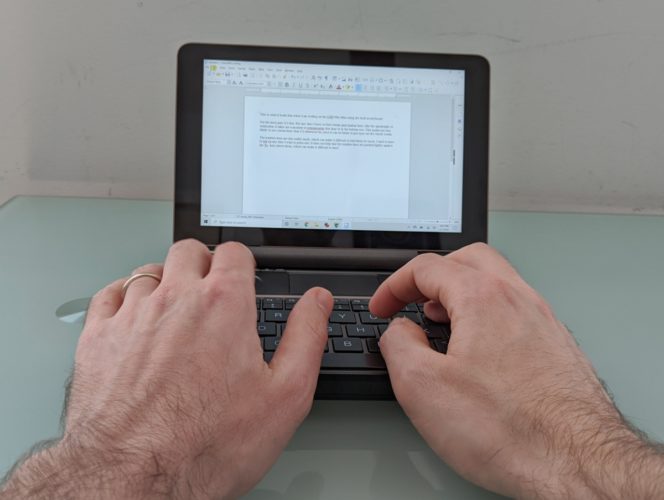 And after using the Win Max for a few days, it’s clear to me that it makes the most sense to think of the GPD Win Max as a portable gaming PC that you can also use for other stuff from time to time.

With that in mind, let’s take a look at some of the different input/control options included in the Win Max.

The GPD Win Max has a backlit keyboard with letter keys featuring keycaps that are pretty much the same size as the ones you’d find on a larger laptop — they’re just closer together and surrounded by number, symbol, and punctuation keys with an unconventional layout. 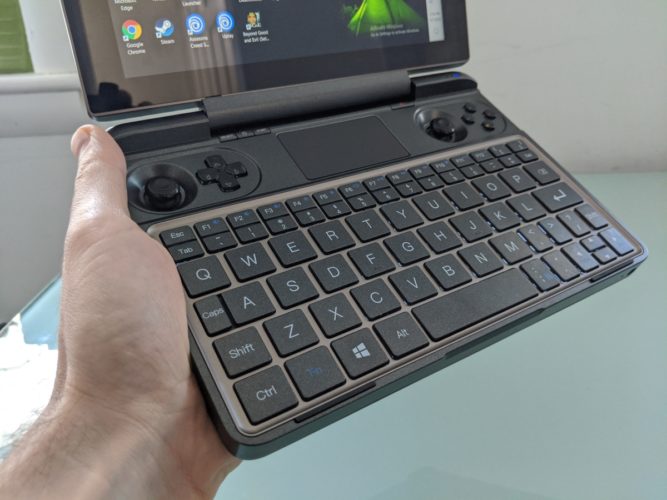 Here are a few things that keep tripping me up:

OK, so like I said, there are a lot of compromises. But you can touch type on this keyboard with a little practice. That’s something that’s not really possible with the GPD Win or Win 2, both of which had smaller screens and keyboards that were more appropriate for thumb-typing.

One thing I should point out about the images below is that I snapped them using my Google Pixel 2 smartphone… which does a pretty good job with low-light photography, even when I’m not shooting in Night Mode. So it’s actually easier to make out the blue Fn key lettering in these pictures than it is in real-life (particularly in the dark photos showing the backlit keyboard).

Since GPD put a set of game controllers above the keyboard, there’s no room beneath the keys for a touchpad. So the company put the touchpad in between the controllers. 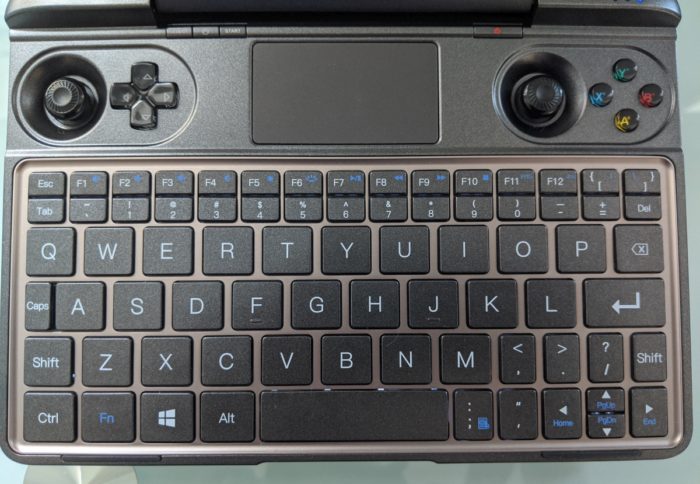 The touchpad is small, but effective. While there are no left and right buttons to click, the touchpad supports multi-touch gestures. So you can tap one finger to click or tap two fingers to emulate a right-click. 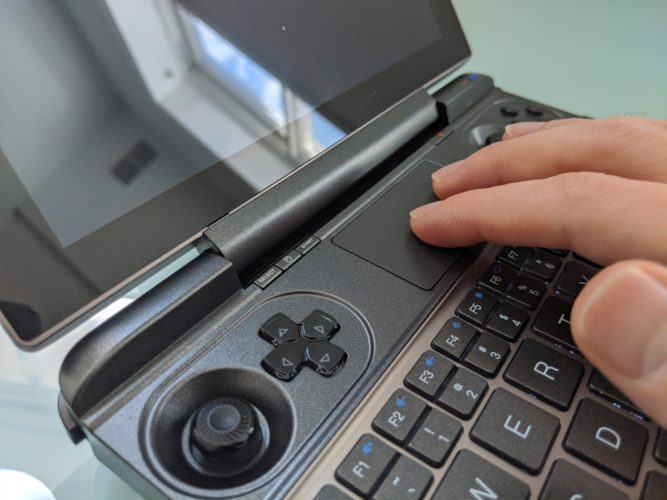 And if you’d rather just reach up and touch the display, you can do that as well. The Win Max has a multi-touch screen that supports Windows 10’s tap and swipe gestures. You could also bring up an on-screen keyboard if you really wanted to, but it doesn’t really make much sense to do that since the Win Max is a touchscreen laptop and not a convertible tablet (the screen can fold back to a 180-degree angle, but that’s as far as it goes).

Using the game controllers as a mouse

There’s another way to interact with content – you can use the game controllers as a mouse.

Flip the switch on the left side of the Win Max from gamepad to mouse mode, and you can use the right analog stick to move a mouse cursor. 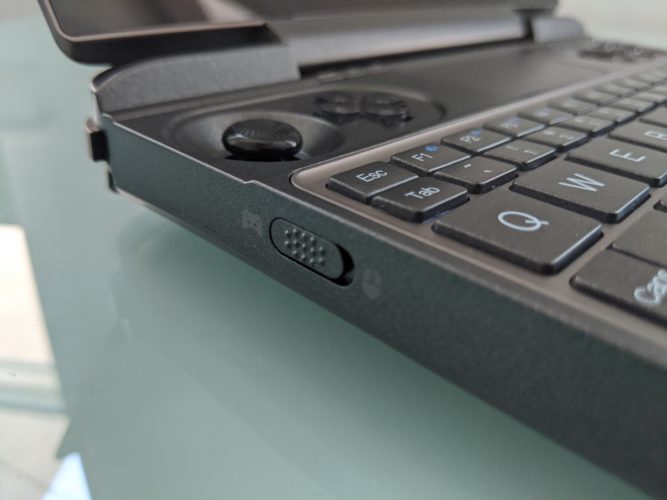 The L1 button functions as left-click button, and the R1 button works as a right-click. This lets you hold the computer in two hands and navigate without using the touchpad, touchscreen, or connecting a physical mouse.

And honestly, if you’re interested in the GPD Win Max, it’s probably because you’re looking for a computer that you can hold in two hands while playing PC games. So it’s good to know that it’s relatively easy to get other things done while holding the system in the same posture.

Weighing in at 1.8 pounds, the GPD Win Max isn’t that much lighter than some recent 13.3 inch laptops. And measuring 8.1″ x 5.5″ x 1″, it’s not small enough to be pocket-sized. But it is pretty comfortable to prop up on your lap for an extended gaming session just about anywhere. And that’s where the game control buttons and PC hardware come into play.

Sure, most 15.6 inch gaming laptops have 1080p or higher-resolution displays, but it takes less graphics horsepower to drive a lower-resolution screen, allowing GPD to get away with using one of the best integrated GPUs on the market rather than opting for discrete graphics. And since the GPD Win Max has a smaller screen, the display packs roughly the same number of pixels per inch as a 15.6 inch laptop with a 2560 x 1440 pixel display (188/189 ppi).

Anyway, what I’m saying is that since my GPD Win max demo unit arrived on Monday, I’ve spent most of my time testing it on my lap, and the display looks fine… and the controllers feel comfortable. 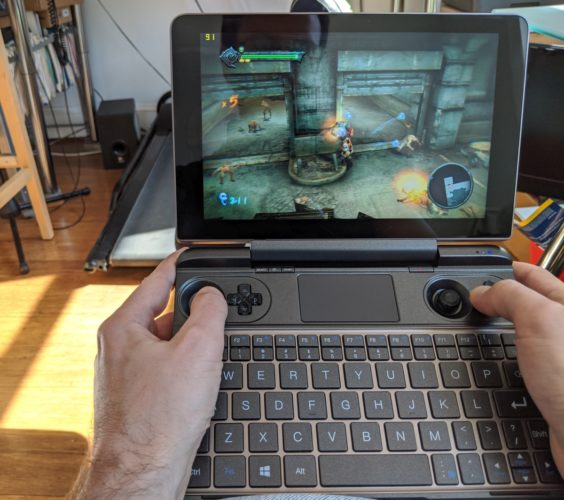 I’m not a serious gamer and don’t have a lot of experience with game consoles or gaming PCs, but my first thought was that the sticks and buttons on the Win Max looked a bit smaller than I expected. They feel fine though.

The Win max weighs about twice as much as a Nintendo Switch with Joy-con controllers attached. So I’m not sure I’d want to spend a lot of time holding it aloft and playing games while standing up. But when you’re sitting down and resting the front of the notebook on your lap, it’s easy to position my hands so that my index fingers wrap around the shoulder buttons and my thumbs can reach the analog sticks, D-Pad, and X, Y, A, and B buttons.

In this position, I’ve comfortably played a bit of Darksiders, Watch Dogs, and Hob with no trouble. 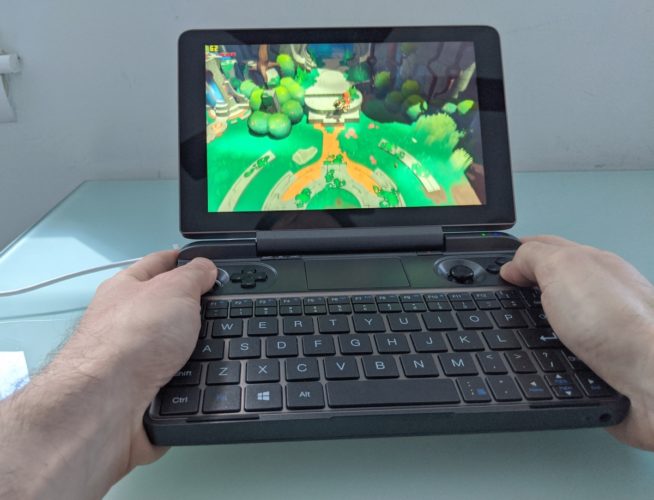 If you want to see more GPD Win Max game play, I’d recommend checking out the Win Max playlist from YouTuber The Phawx. He’s tested a number of popular games including GTA 5, Doom, Metro Exodus, Witcher 3, and Assassin’s Creed Odyssey, as well as some PS2 and Wii U emulation. He’s also a much more experienced gamer than I am.

While I’m on the subject of gaming performance, I’ll also just point out that, as  I mentioned in my unboxing and first-impressions article/video, the fan can get pretty loud under load… or at just random times. It’s much more noticeable if you’re in a quiet room trying to use the Win Max to get work done. If you’re playing games and the twin fans kicks in while music and monster noises are blasting out of the speakers, it’s less noticeable.

But you want the fans to kick in. Because if it doesn’t, the processor gets hot and throttling kicks in. For some reason the fan failed to spin up at one point when I was trying to play Darksiders, and frame rates were stuck in the 10-20 fps range. Under normal conditions when the fans are working, I can get 60-90 fps in the same game. 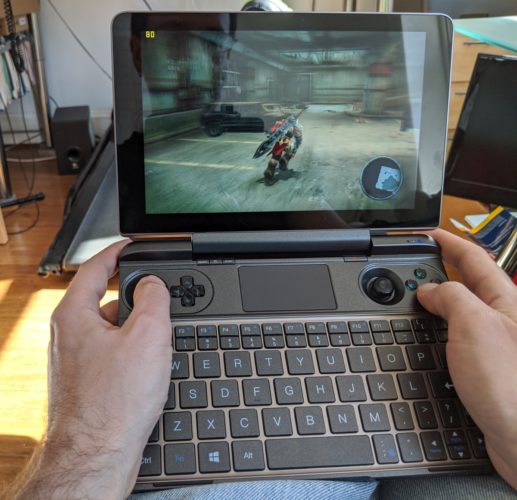 I’m also using pre-production hardware, so it’s possible whatever quirk caused my fan to fail until I rebooted the computer is just a glitch that may be worked out by the time GPD is ready to ship the Win max.

The company plans to launch a crowdfunding campaign for the Win Max starting May 18th, and backers will be able to reserve one for a discounted price of $779 at that time.

The Win Max should begin shipping after the crowdfunding campaign ends on June 30th. At that time, the price will go up by an unspecified amount.

I haven’t run any benchmarks or done extensive battery life tests yet, so stay tuned for those.

For now, here’s a reminder of what’s included with the Win Max: