But we’re expecting to see a lot of laptops with those specs in the coming months. What makes this one different is that it also has two displays. 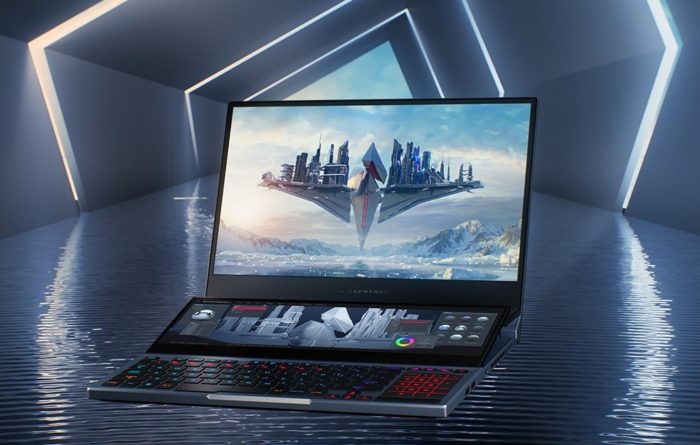 The primary screen is a 15.6 inch display that’s exactly where you’d expect a laptop screen to be. The seconds screen is a 14.1 inch, 3840 x 1100 pixel touchscreen that hangs out above the keyboard and below the main screen

That secondary display lifts up at a 13 degree angle when you open the notebook, making it easier to view and interact with whether you’re using it to view in-game content like maps, stats, or menus, chat windows, or other apps.

Since the second screen takes up a lot of space, there’s no room for a touchpad below the keyboard on the ROG Zephyrus Duo 15, so Asus put the touchpad to the right side of the keyboard.

The laptop’s other features include a Thunderbolt 3 port, HDMI, Ethernet, and audio jacks, and two USB 3.2 Type-A ports. The notebook has a 90 Wh battery… which is pretty big by laptop standards, but still probably not enough to support more than a few hours of dual-screen gaming.

The ROG Zephryus Duo 15 weighs about 5.2 pounds and measures about 0.8 inches thick.

Asus says the ROG Zephyrus Duo 15 will be available in June, with a starting price of more than $3500 in Europe. There’s no word on US pricing or availability yet.

If that’s too much money to spend on a gaming laptop, Asus does also plan to launch several other new models with the latest Intel and NVIDIA chips, most of which should have lower starting prices.

via @ASUS_ROG, NotebookCheck, Engadget (1)(2), and The Verge