The Raspberry Pi isn’t the only single-board computer in town, and the folks at Hardkernel have been making some impressive alternatives for years.

In other words, it’s $5 cheaper than a Raspberry Pi 4 with the same amount of RAM and according to Hardkernel it scores higher in at least some benchmarks. But there are some trade-offs. 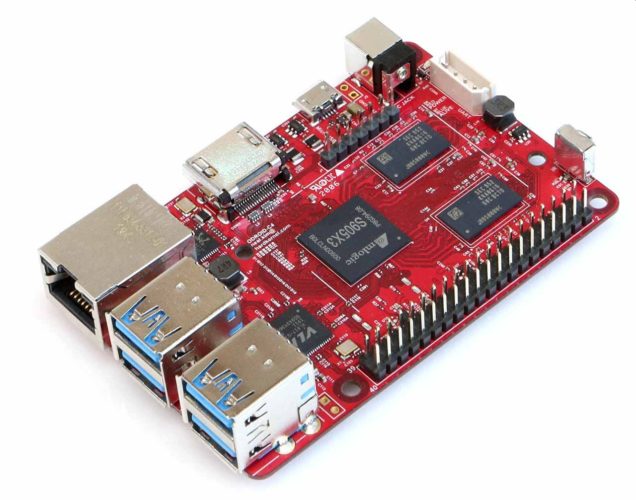 For example, the latest Raspberry Pi computers include WiFi and Bluetooth. You’ll need to use an optional USB adapter to add those features to an ODROID-C4.

And while the Raspberry Pi 4 has two micro HDMI ports and a USB-C port, the ODROID-C4 has just a single full-sized HDMI port and a micro USB port.

On the other hand, all of its USB Type-A ports support USB 3.0 speeds, while two of the Raspberry Pi’s ports are USB 2.0. And the ODROID-C4 has optional support for eMMC storage modules, while the Raspberry Pi series computers use only microSD cards for their primary storage. Hardkernel’s board also comes with a heat sink.

You can find detailed specs for the ODROID-C4 at Hardkernel’s website, but here are some highlights:

The ODROID-C4 supports Android and Linux and there are currently builds of Ubuntu 20.04 and Android 9 Pie available for download from the ODROID Wiki.

2 replies on “$50 ODROID-C4 is a single board computer with 4GB RAM, quad-core ARM Cortex-A55 processor”