AMD’s Ryzen Embedded processors are designed for small, low-power computers. But the DFI GHF51 may be the smallest to date.

Measuring 84mm x 55mm (3.31″ x 2.17″) this single-board computer is about the size of a Raspberry Pi Model B. But rather than an ARM-based processor, the DFI GHF51 is powered by a 12-watt AMD Ryzen Embedded R1000 series processor.

The little computer should be available later this year. There’s no word on the price yet, but I wouldn’t expect the GHF51 to be cheap. Not only is it much more powerful than a Raspberry Pi, but it’s also a more specialized device that’s likely aimed at hardware developers rather than the general public. 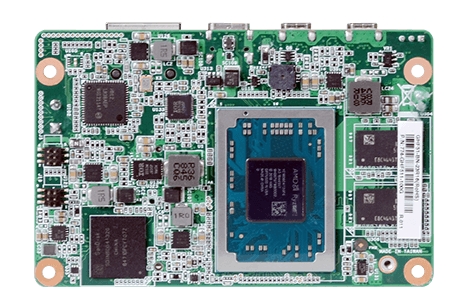 The DFI GHF51 features AMD Radeon Vega graphics with up to 3 compute units, support for H.265 video encoding and decoding, VP9 decoding, and support for up displays with resolutions up to 4096 x 2160 pixels at 24 Hz.

The system supports 2GB to 8GB of single-channel DDR4-3200 memory, 16GB to 64GB of eMMC storage, and has a handful of ports including:

DFI says its new single board computer supports Windows 10 IoT Enterprise 64-bit or Linux, but with a Ryzen Embedded x86_x64 processor, there’s no reason you shouldn’t be able to run Windows 10 Home or Pro on this thing as well.

This isn’t DFI’s first Raspberry Pi-sized PC with an x86 processor. The company also offers an ALF51 model with an Intel Atom E3900 processor, support for up to 4GB of RAM and a promise of 15 years of support for the CPU (according to Intel’s roadmap for its Internet of Things processors).