Apple’s new 2020 iPad Pro models will be the company’s first tablets to ship with support for mouse and trackpad input. But when iOS 13.4 rolls out to older iPads next week, you’ll be able to use those pointing accessories with most recent iPads… with no need to spend $799 or more on an iPad Pro and another $299 and up for Apple’s Magic Keyboard.

Already have an iPad? You could just use any old USB or Bluetooth mouse.

But Logitech’s new Combo Touch Case is also an option if you’re looking for a keyboard & touchpad that’s half the price of Apple’s, and which works with several recent iPad models. 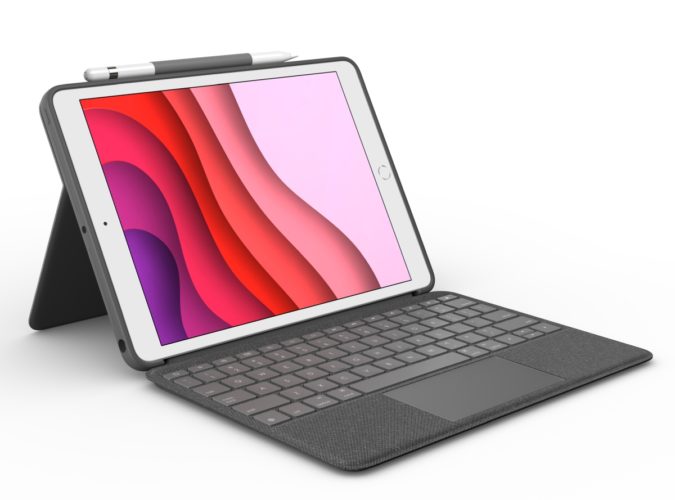 The Logitech Combo Touch Case is a folio style keyboard-cover with a built-in kickstand, a backlit keyboard (with five levels of adjustable brightness), and a trackpad with support for multi-touch input.

The keyboard features iOS-specific function keys including home, search, and an option to show or hide the on-screen virtual keyboard. There are also volume, brightness, and media playback control buttons and a screen lock button (that’s compatible with 7th-gen iPads).

When you’re not using the keyboard, you can detach it while keeping your iPad in the case for use with the kickstand. When you are using it, the keyboard draws power and connects to the tablet via a Smart Connector, so it doesn’t require its own battery.

At the top of the case there’s a loop for storing an Apple Pencil or Logitech Crayon accessory.

Logitech is also introducing a new Slim Folio Pro line of backlit keyboards for 11 inch and 12.9 inch iPad Pro models. It should be available in April for $120 and up, but the Slim Folio Pro case does not include a trackpad. 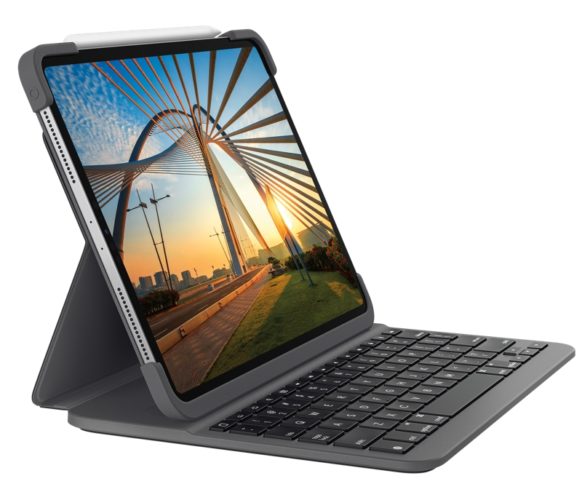