We learned all of that when LG launched the phone last month. But one thing the company didn’t highlight at the time? It also supports pressure-sensitive input when used with an active pen. 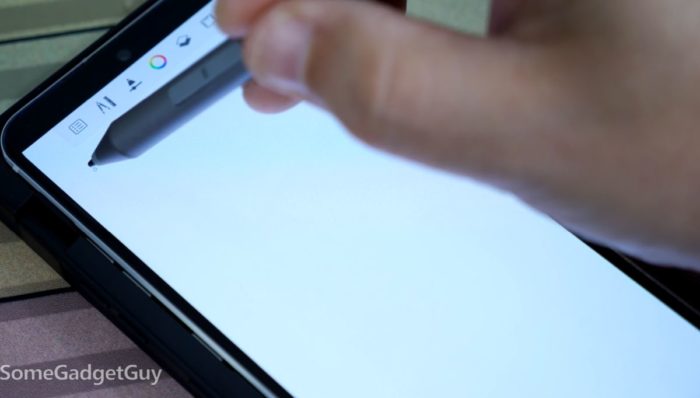 LG doesn’t sell an official pen accessory for the LG V60 ThinQ 5G. But it turns out that it’s compatible with any Windows-compatible AES 2.0 pen. So if you have a recent Surface Pen or a similar pen from Wacom, HP, Lenovo, or other companies, it may work.

Update: An earlier version of this article says “any Windows-compatible AES pen,” but the text has been updated to indicate you’ll need an AES 2.0 pen.

Fire up the phone and dig into the settings and you’ll find a Pen section that lets you toggle “Pen key shortcuts” including:

When using drawing or note-taking apps, the LG V60 ThinQ supports pressure sensitivity, palm rejection, and tilt controls. And you can also map shortcuts to the buttons on the pen, allowing you to do things like create a new memo or capture a GIF when holding a button on the pen.

Since LG doesn’t offer an official pen, you don’t get some of the wireless features available from a Samsung Galaxy Note pen such as the ability to function as a camera trigger button. But if you’ve already got a pen lying around, LG’s latest flagship could be a relatively affordable/versatile alternative to a Galaxy Note, with LG’s phone selling for about $800 without carrier subsidies.

Update: Actually, Samsung is selling unlocked Galaxy Note 10 smartphones for the same $800 starting price at the moment. So there’s not much of a price difference. But LG’s phone has a newer processor, 5G support, and optional support for an additional touchscreen display.

Oh… and the optional dual screen accessory? It supports pen input as well.