KDE Plasma is a free and open source desktop environment originally designed for GNU/Linux PCs, and eventually adapted to phones. Now the folks at KDE have announced a new version customized for TVs and other big-screen displays. 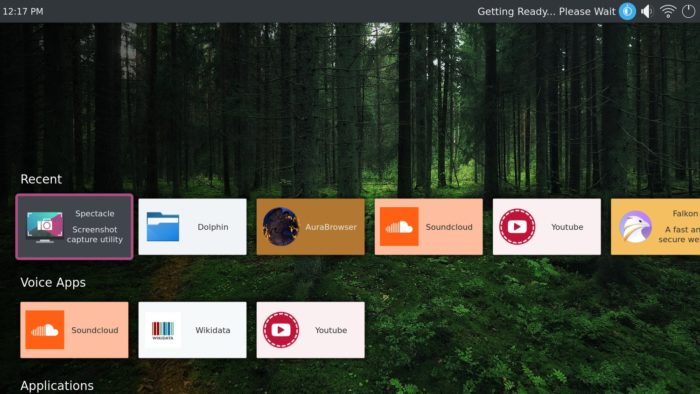 In a nutshell, Plasma Bigscreen brings the sort of features you’d expect from a smart TV platform like Apple TV, Android TV, Fire OS, or the Roku user interface. It’s optimized so that you can easily view everything while sitting on a couch ten feet from the screen. And you can navigate using a remote control or voice controls rather than a mouse and keyboard.

Instead of small icons, apps are represented by large cards that should be easy to see from your couch. And rows of apps are arranged by category such as games, applications, and voice apps. There’s a Recent section at the top of the screen to help you find that thing you were using last time you turned on your TV.

Voice controls are handled by the Mycroft voice assistant, an open source alternative to Alexa, Google Assistant, or Siri. In addition to letting you search and launch apps or websites by voice, Mycroft supports third-party skills for things like weather forecasts, or recipes.

While Plasma Bigscreen is designed for… big screens, it can run on small, low-power devices. There’s already a development preview (beta) build available for the Raspberry Pi 4 Model B, which means that you can pay $35 or more to assemble an inexpensive home theater PC that uses KDE’s new UI.

There’s also experimental support for HDMI-CEC, allowing you to use compatible remote controls to control the user interface. But you’ll probably want a USB or Bluetooth remote with a microphone if you want to try out the Mycroft voice assistant.

Right now there’s a fairly small number of Bigscreen apps including YouTube, Soundcloud, and Wikidata. But that list could grow over time if more users and developers adopt the platform as an open source alternative to existing smart TV platforms.

via KDE, Aditya Mehra, and TuxPhones