Google’s flagship Pixel phones have gotten mixed reviews over the past few years for their great software, underwhelming hardware and high price tags. But last year’s Google Pixel 3a and Pixel 3a XL got a lot of love for offering some of those same features at a much more affordable price tag.

So it’s not surprising that the company plans to launch a Pixel 4a mid-range phone this year. Details have been slowly leaking for the past few weeks. Now a Spanish-language hands-on video provides almost all the info you could want… except for the and release date.

Update: Evan Blass has posted some marketing images that suggest the Pixel 4a will have a $399 starting price, just like the Pixel 3a before it. 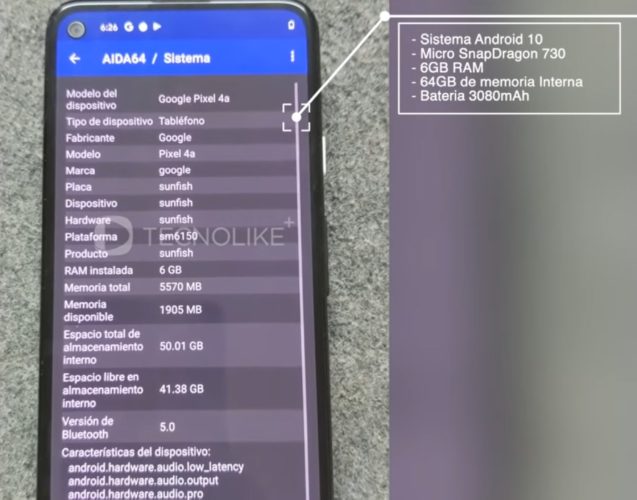 So if this video shows the real thing, what can we expect from the upcoming Google Pixel 4a?

Unsurprisingly, the phone is expected to ship with Android 10, and it will supports WiFi 5, Bluetooth 5.0, and 4G LTE. There’s no support for 5G networks or 802.11ax (WiFi 6). The display will have a 60 Hz refresh rate, rather than the 90 Hz displays used for higher-priced Pixel 4 phones. And there’s no option for getting more than 64GB of storage.

While a key selling point for the Pixel 3a was that you got the same stellar camera experience offered by the Pixel 3 smartphone for half the price, it looks like this year’s mid-range Pixel phone will skip at least one camera feature. The Pixel 4 has two cameras — primary and telephoto. The Pixel 4a will have just the primary camera, although it will probably support Google’s Super Res Zoom technology that uses software algorithms to make digital zoom work better than just snapping a photo and cropping it to highlight the section you want to see.

One other thing the video seems to confirm: the Pixel 4a’s code-name is “sunfish.” That’s something we’d first heard about a month ago.

via Slashleaks and 9to5Google