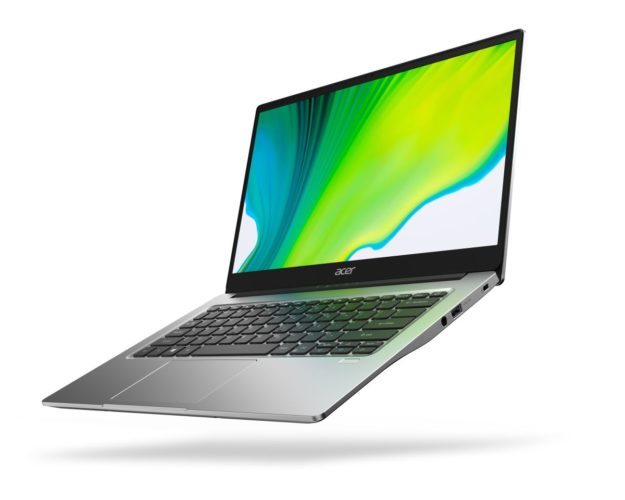 But it’s what’s under the hood that really sets it apart from the company’s earlier laptops.

AMD unveiled its Ryzen 4000 series chips during CES in January, promising significant CPU performance improvements paired with the company’s Radeon Vega graphics architecture to compete with Intel’s 10th-gen “Ice Lake” processors, likely at a lower cost… and with up to 2X the CPU cores and threads, which could offer significantly better performance at some tasks.

The new Acer Aspire Swift 3 supports up to an AMD Ryzen 7 4700U processor, which is a 15-watt, 8-core (and 8-thread) processor with a base CPU speed of 2 GHz, support for boost speeds up to 4.1 GHz, and 7-core Radeon Vega graphics.

AMD is also promising its new chip will deliver longer battery life than the company’s earlier chips thanks to improvements in energy efficiency. While I always take manufacturer battery life claims with a grain of salt, Acer says the Swift 3 will run for up to 11.5 hours on a charge — and it also supports fast charging, so plugging the notebook in for about 30 minutes should provide up to 4 hours of additional run time.

The new Acer Swift 5 notebook, meanwhile, is powered by an AMD Ryzen 5 4500U 6-core (and 6-thread) processor with 6-core Radeon Vega graphics. Acer says this model has an aluminum lid (and what looks like a plastic body), a full HD IPS display, and support for up to 24GB of RAM and dual storage support (up to a 1TB PCIe SSD and up to a 2TB HDD).