Apple’s new MacBook Air is a thin and light laptop that the company says has a better keyboard and twice as much storage as previous-gen models. But the company says the move from 8th-gen to 10th-gen Intel Core Ice Lake Y-series processors also brings up to an 2X performance boost.

What the company didn’t say when revealing the new laptop last week was which 10th-gen Core chips it was using.

As it turns out, the answer is a set of previously-unannounced, off-roadmap chips that Intel may have developed exclusively for Apple’s new MacBook Air laptops. 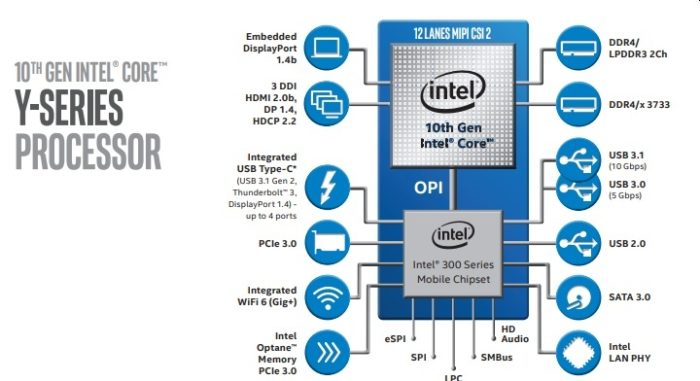 Specifically, here are the new chips:

These processors are similar to ones that Intel announced last year, but there are a few key differences between the versions with and without an N in the name.

The new N-series chips have a smaller package size and the Core i5 and Core i7 variants have higher base clock speeds and TDP ratings.

But they also lack support for Intel Optane memory, Intel Trusted Execution, and configurable TDP, most likely because Apple didn’t want or need those features for its MacBook Air.

Here are some of the key differences between Intel’s older Ice Lake Y-series chips and the new ones used in the MacBook Air:

Interestingly, I believe the MacBook Air is the first product to ship with any Ice lake Y-series processors though, so it’s tough to say how the new chips will compare to the “older,” previously-announced ones when it comes to performance. But you can check out GeekBench listings for the new chips if you’re curious to see how they do in benchmarks:

Update: Intel hasn’t quite confirmed that these new chips are designed for Apple’s new MacBook Air, but in a statement to Anandtech, the company does say that “The ‘N’ notes a slightly differentiated, customer-specific version of those SKUs.”

In other words, these chips will not be used for any non-Apple products.

via Notebook Check and @TUM-APISAK