Late last year a company founded by the little brother of the late Colombian drug lord Pablo Escobar started promising to sell a smartphone with a foldable display for a fraction of the price charged by more established companies.

So far Escobar Inc has failed to deliver its first phone… but that hasn’t stopped the company from taking orders for a second, even more unlikely product — a Samsung Galaxy Fold clone priced at $399 (or about $1580 less than Samsung charges for a nearly identical device).

You probably shouldn’t give this company money. In fact, I’m not even going to link to the website (it’s easy to find, but I don’t want to give them the SEO — also the company’s marketing may not be entirely safe for work). 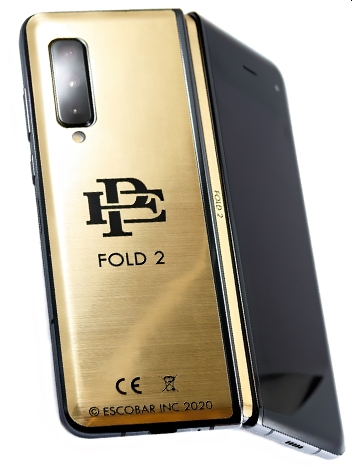 On paper, the Escobar Fold 2 smartphone looks like a great deal. It’s a phone with a 7.3 inch, 2152 x 1536 pixel display that folds in half, a secondary 1680 x 720 pixel display on the outside, a Qualcomm Snapdragon 855 processor, at least 8GB of RAM and 128GB of storage, and a total of five cameras (one less than the Samsung Galaxy Fold).

The company claims it can offer the phone for cheaper than Samsung because it sourced the hardware from “secondary factories” in China, which are known for cloning popular phone designs (if not the under-the-hood features).

But even if you believe it’s possible to produce a halfway decent Galaxy Fold clone and sell it for about 20-percent of the price Samsung charges, there’s a reddit community filled with people who were burned when they tried to purchase the Escobar Fold 1 smartphone last year.

The company appears to be shipping customers a book and a promise that the customers will receive a Fold 2 instead.

I figure it’s just a matter of time before folks who order a Fold 2 get a new book and a promise of an Escobar Fold 3.

Update: It turns out that some folks *are* actually receiving phones. But they’re… pretty much what they look like rather than what was originally promised. These aren’t new devices sourced from Chinese manufacturers. They’re allegedly unsold Samsung Galaxy Fold inventory picked up for cheap, slapped with some Escobar Fold branding, and then shipped out to “1000 lucky people” in February rather than in March.

That said, it’s unclear if this is evidence that Escobar Inc (or Pablo Phones, as the letter included in the packaging describes the company), is on the up and up and will actually be able to ship thousands of phones for $399 each or if this is a marketing ploy.

I’d still proceed with extreme caution… although it does look like there’s at least a chance that if you spend money on an Escobar Fold smartphone, you might actually get… a Samsung phone with Escobar branding.