What happens if you take Google’s smallest smart speaker, and stuff it inside an old-fashioned rotary-dial smartphone?

That… is a question that honestly never occurred to me. But now we have an answer anyway, and it’s actually kind of cool. 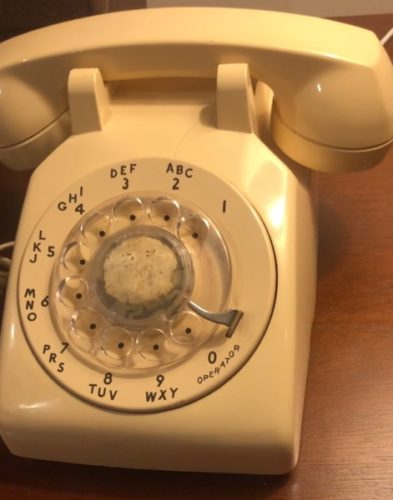 Redditor Movieman_75 took a Google Home Mini, put it inside a rotary phone, and even routed the audio so that it plays out of the phone’s handset speaker.

That means you have to pick up the phone to hear answers to your questions, music, or anything else coming from the Google Home Mini. Want to stop listening? Just put the receiver down and the speaker shuts off.

It’s worth noting that the microphone for this particular DIY project is still located in the Google Home Mini itself. That means you don’t have to pick up the receiver to start talking to Google Assistant — just say “OK Google” within earshot of the device. You won’t hear any response unless you pick up the phone, but the device is still always listening, so there’s no real privacy upshot here.

That said, if you want to use Google Assistant to make voice calls, holding the handset to your ear means that anyone in your home listening in would only hear your end of the conversation.

I also wonder how hard it would be to go a step further and replace the Google Home Mini’s built-in mic by routing the audio from the rotary phone’s handset to the device. That would theoretically let you sever the connection when the receiver is placed on its cradle, meaning you’d only be able to talk to Google Assistant by picking up the phone.

One thing to keep in mind about Movieman_75’s Google Home Mini in a rotary phone project is that the rotary dial doesn’t actually do anything.

But dials do seem to be having a moment — earlier this month Justine Haupt revealed her own DIY rotary phone project: the Rotary Cellphone, which is a basic cellphone that lets you place calls with a rotary dial (or a few speed dial buttons).