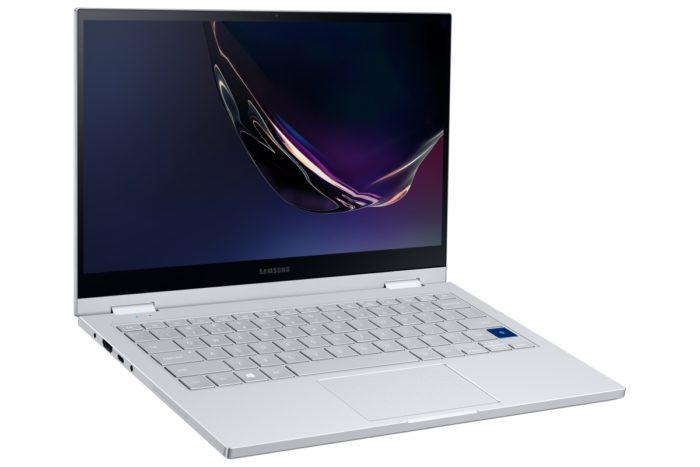 The entry-level price gets you a model with 8GB of RAM and 256GB of solid state storage, but Samsung will also offer configurations with up to 12GB of memory and 1TB of NVMe storage.

Other features include an aluminum chassis, a backlit keyboard, a fingerprint sensor, WiFi 6 support, stereo 1.5 watt speakers, a 720p camera with dual array digital microphones, a 54 Wh battery, and a decent selection of ports including:

The laptop measures 12″ x 8″ x 0.55″ and weighs about 2.6 pounds and support an optional Active Pen for pressure-sensitive input, although the pen is sold separately.

The key selling point for this convertible laptop is probably the display. Quantum Dot displays offer wider color gamut and deeper blacks than typical LED displays, while also consuming less power. Samsung says the Galaxy Book Flex α can display more than a billion colors and supports up to 600-nits of brightness.

While QLED displays may not quite match AMOLED screens when it comes to black levels, they’re competitive in many other areas, and with a starting price of $829, the new Samsung Galaxy Book Flex α is going to be a lot more affordable than any AMOLED laptops we’ve seen to date.

That said, if you’re looking for a bit more horsepower, that’s where the previously-announced models come in. The Galaxy Book Flex is a similarly-sized laptop, but it supports up to 16GB of RAM, has two Thunderbolt 3 ports, a 69.7 Wh battery, and Intel Ice Lake processors with Iris Plus graphics. It’s expected to sell for $1400 and up.

Samsung’s Galaxy Book Ion, meanwhile, is a clasmshell-style laptop with an Intel Comet Lake processor, two Thunderbolt 3 ports, and a QLED display, and an expected starting price of $1100.

Both the Galaxy Book Flex and Ion will be available with 13.3 inch or 15.6 inch displays — and the larger versions of each will both feature NVIDIA GeForce MX250 graphics.