The Nintendo GameCube came with one of the most iconic game controllers in video gaming history, so it was kind of a big deal when Nintendo announced that you’d be able to use GameCube controllers with a Switch to play games like Super Smash Bros. Ultimate — and the company even released a new made-for-Switch version of the controller.

But unlike the usual Switch Joy-Cons, the GameCube version doesn’t attach to the sides of the Switch for handheld gaming.

So hacker Shank Mods decided to make his own GameCube Joy-Cons that do just that. 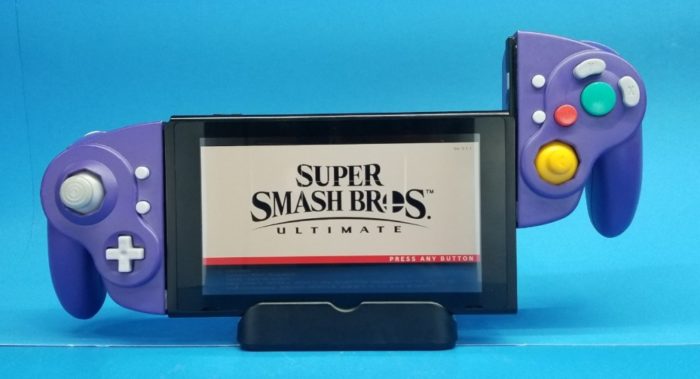 The theory is simple enough — scoop out the guts of a Joy-Con, put them inside the shell of a GameCube controller, cut it in half, and set it up so you can slap it on the sides of Nintendo’s gaming tablet.

In practice, things were a bit trickier — the internal design of the GameCube controllers don’t make things easy, so Shank Mods had to use some custom 3D-printed components. But he used an official Nintendo WaveBird wireless GameCube-style controller for the case, since it’s larger than the wired GameCube controller, which means there’s more room for the necessary components.

From there, he cut the WaveBird in half, scanned it to create a 3D model, and then designed an attachable 3D-printed add-on that would add rails so the controller can slide into place on the Switch.

A few extra components had to be added, since the GameCube controller doesn’t have all the buttons used in the Joy-Cons, doesn’t have the same types of clicky-analog sticks, among other things. And then there’s the work of actually getting the electronic components of a Joy-Con to work in the new controller.

The end result is a set of GameCube-style Joy-Cons that can be used wirelessly, attached to the sides of the Switch, attached to a center piece for use as a standalone handheld controller, or used (awkwardly) for 2-player gaming.

This is pretty much a one-of-a-kind mod. You can’t buy a GameCube Joy-Con set for your Switch, and making your own would clearly involve a lot of work. In fact, Shank Mods didn’t do it all along — over the course of a 14-minute video explaining the build process, he shouts out to several other game system modders that helped with this project.

This isn’t the first impressive mod we’ve seen from Shank Mods — a few years ago he built the KillMii, which puts a fully functional Nintendo Wii into a case made from an Altoids tin. That mod… wasn’t all that practical. The controls were difficult to use and the system only got about 10 minutes of battery life.

But the GameCube Joy-Cons project looks a heck of a lot more useful.