Google has added real-time voice translation to Google Assistant for smartphones. Just ask Google to act as your translator or help you speak a language, and it can help you communicate with someone who speaks a different language from you.

Google’s “Interpreter mode” could come in handy if you’re ordering food or asking for directions while traveling abroad, or trying to communicate with an international business partner or long-lost relative. Maybe. 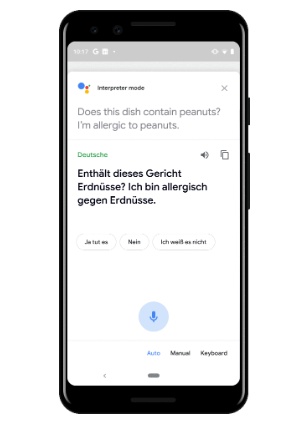 Interpreter mode is now available for the Google Assistant app for Android and iOS, and it supports 44 languages.

You can type or speak to get a translation, and in some cases Google Assistant may present Smart Replies depending on the content of your conversation.

Google first teased Interpreter mode in January and rolled it out for Smart displays like the Google Nest Hub in February, although only 26 languages were supported at the time.

And the Google Translate mobile app (with support for 103 languages and an optional “conversation mode” for 2-way speech translation between 32) has been available for some time. But Google Assistant integration should make it a little easier to activate real-time voice translation and turn your phone into the 21st-century, Earthbound equivalent of a Babel fish.