With a steel chassis and a passive cooling system, this model is a little larger than their actively cooled counterparts. But at 7.9′ x 6.5″ x 1.6″ they’re still pretty compact. 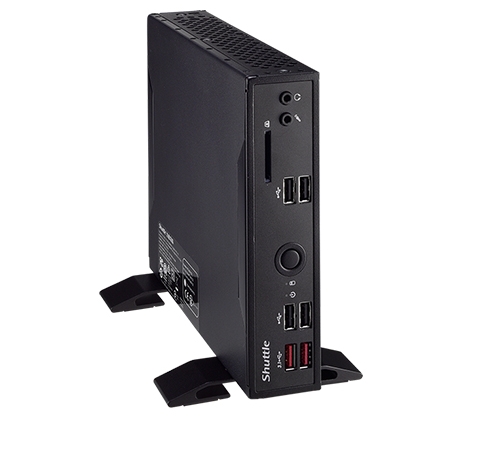 Those are all 15-watt, laptop-class processors, but they have a little more room to breathe in this small desktop case, which is why Shuttle can get away with going fanless.

The computers feature HDMI 2.0a, DisplayPort, and VGA outputs, dual Gigabit Ethernet ports, and a whole lot of other ports, including six USB ports on the front, two on the back, an SD card reader, mic and headphone jacks, and a serial port on some configurations.

Shuttle also makes the computer easy to open — there are two access panels on the one side that you can remove to access the 2.5″ drive bay. Removing a panel covering the other side gives you access to an M.2 2280 slot for an optional NVMe SSD and dual SODIMM slots (for up to 32GB of DDR4-2400 memory).