The Peakago is a 7 inch mini-laptop that’s up for pre-order through an Indiegogo campaign that runs through mid-December.

With prices starting as low as $269 during the crowdfunding campaign, it’s one of the most affordable mini-laptops to date. But it’s also one of the least powerful to date.

The good news is that Peakago is giving the little laptop a spec bump. The company has announced that every unit will now ship with faster WiFi. And some models will also have a faster processor. 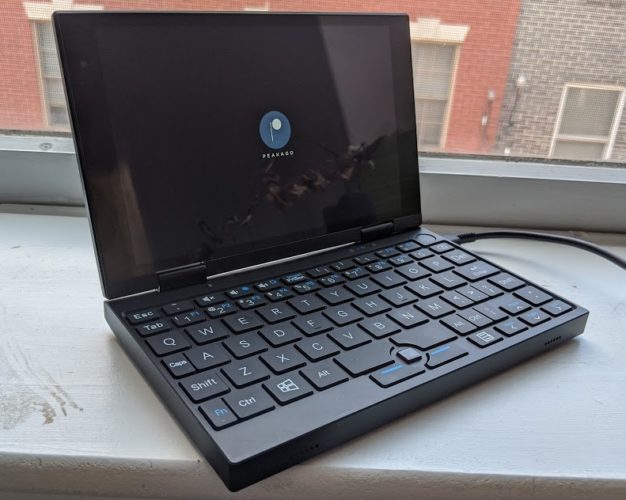 That should lead to faster and more reliable wireless performance for web surfing and/or transferring data over a local network.

Peakago will also offer some models with an Intel Pentium N4200 Apollo Lake processor. While that’s still a 3-year-old chip, it should offer a significant performance boost over the Intel Atom x5-Z8350 Cherry Trail chip that was the only option up until now.

The Pentium chip is a 6 watt processor that performs about 1.6X as well in Passmark as the 4 watt Atom chip.

Not every version of the Peakago is getting the processor upgrade though — just the mid-range WiFi-only model. But the good news is that the CPU upgrade is free for folks who have already ordered that model and/or anyone who orders before November 22nd.

So here are the new crowdfunding prices for the Peakago lineup:

Each model has a 7 inch, 1920 x 1200 pixel IPS touchscreen display with a 360-degree hinge for use in laptop or tablet mode, a VGA webcam, USB Type-C, Type-A, micro HDMI, microSD card, and headset jacks. And each version has the same 4,500 mAh battery.

I’ve had a pre-production unit (with an Atom chip and WiFi 4) for the past week or so. It is truly a pocket-sized laptop similar to the GPD Pocket or One Mix Yoga line of devices… but I’ve been pretty underwhelmed by the little laptop’s performance.

So I’m pleasantly surprised to see that Peakago will offer a model with a faster processor, even if it means a small price increase (after November 22nd).

Here are some benchmark results for the Atom x5-z8350 model, by the way., I haven’t run a lot of different tests because my demo unit is still running Windows 10 Home in S Mode, so I just grabbed a few benchmarks that were available from the Windows Store and ran them on a few other PCs I have handy.

Even with the spec bump, the Peakago won’t exactly be the fastest mini-laptop around. But it should outperform the entry-level GPD Pocket 2 with a Celeron 3965Y processor when it comes to CPU performance (although it will likely lag behind that model when it comes to graphics performance).