Xiaomi’s next smartphone is expected to feature a 6.5 inch curved OLED display, support for up to 12GB of RAM and 256GB of storage, and a massive 5,170 mAh battery.

But the most unusual thing about the upcoming Mi Note 10 is probably its camera system.

The phone has five of them on the back — including one that can snap 108 MP photos. 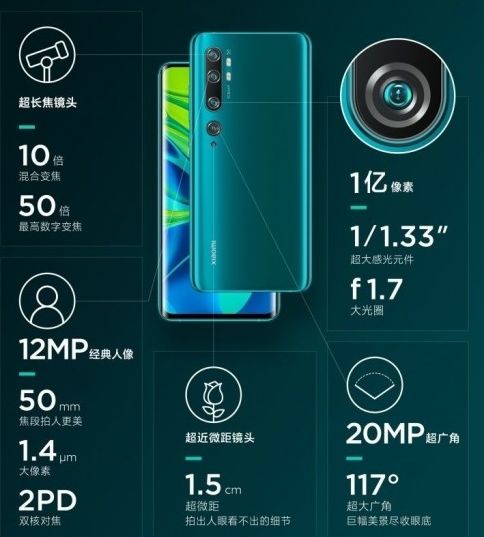 The Mi Note 10, which is also expected to be sold as the Mi CC9 Pro in China, has a 32MP front-facing camera placed in a small notch.

On the back of the phone, you’ll find the phone’s main cameras:

It’s worth noting that while Samsung’s 108MP image sensor can capture photos at resolutions up to 12,032 x 9,024 pixels, it can also combine data from multiple pixels to create a single 27MP image that’s brighter (and which takes up less storage) space.

It’s likely that the smartphone’s camera app will allow users to set their preferences for how the camera is used in the settings.

Xiaomi says the phone can support 5X optical zoom or 10X hybrid zoom thanks to the telephoto camera. And the macro camera allows you to focus on objects as little as 1.5cm (0.6 inches) from the lens.

The company is set to officially launch the smartphone on November 5th, so we’ll probably learn more about the cameras and other specs at that point.

While Xiaomi smartphones don’t tend to be sold in the United States, the company is a big player in China and some other global markets. What may be more significant for North American readers though is that now that Xiaomi is almost ready to start shipping phones with Samsung’s 108 MP image sensor, it’s likely we’ll see it used in other devices soon.

You also may not have to pay an arm and a leg to get your hands on a phone with that high-resolution sensor. Based on the processor specs included in a TENAA listing for the Xiaomi Mi CC9 Pro, GSM Arena makes an educated guess that the phone will ship with a Qualcomm Snapdragon 730G processor, suggesting a mid-range price tag for this phone.

Update: It looks like there may also be a higher-priced “Pro” model with a bigger display, a more powerful processor, and… a smaller battery? That’s just a rumor for now though.

via MySmartPrice, GSM Arena, and WinFuture