Valve’s Steam game client has a Remote Play feature that lets you stream games from a home PC over the internet to play just about anywhere.

Now Valve has added a new Remote Play Together service that builds upon that game streaming technology to let you play local multiplayer games over an internet connection.

Valve says a group of up to four (or maybe more) people can play the same game together over the internet as if they were in the same room. 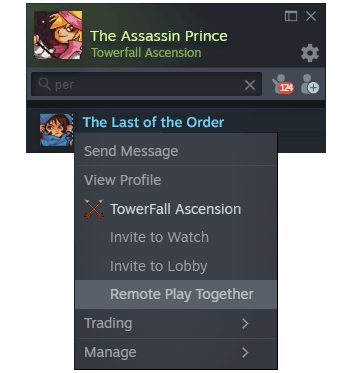 What’s actually happening here is that the game is running on a single user’s PC, while multiple users are connecting to that PC over the internet.

So you’re probably not going to want to use this service for truly competitive gaming. But it does let you play games together that might not have an online multiplayer mode. It could be a fun way to try out new games your friend has purchased without actually traveling to their house or to play local multiplayer titles with friends who don’t live close enough to visit in the first place.

Steam Remote Play lets each user play with their own controllers or mouse and keyboard while streaming audio, video, and voice so that all players can participate.

Under ideal conditions, Valve says you might even be able to play with more than four people at once.