Chinese PC manufacturer Pretech is the latest company to introduce a mini laptop that borrows heavily from the design language of the GPD Pocket and One Mix Yoga line of devices.

Notebook Italia got a look at the new Pretech F700Mi Mini at the HKTDC fair last week, and reports that it’s a tiny, fanless laptop with a 7 inch touchscreen display, a 360-degree hinge, and support for pen input. Unlike most other mini-laptops this small, the F700Mi Mini has a webcam built into the screen bezel.

But it’s also got some of the least impressive specs to date for a modern mini laptop. 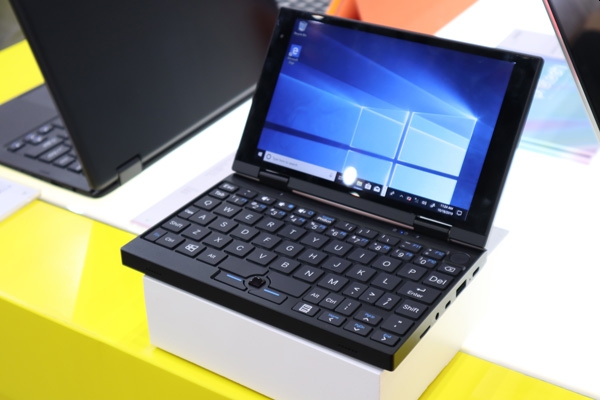 Under the hood, the little laptop sports an Intel Atom x5-Z8350 Cherry Trail processor, a chip that was sluggish by 2016 standards when it was first released, and which seems even more out of date today.

Other features include support for 4GB or 8GB of RAM, and 32GB, 64GB, or 128GB of eMMC storage. That’s neither a lot of storage space for a Windows 10 laptop, nor particularly speedy storage.

Hopefully the underwhelming specs either mean this thing will be really cheap, or that Pretech is just showing off an entry-level configuration with plans to produce more capable versions if clients request better specs.

On the bright side, the Pretech F700Mi Mini has a 1920 x 1200 pixel display which looks pretty nice, stereo front-facing speakers, support for an optional fingerprint sensor in the power button, and a decent range of ports including USB-C, USB 3.0 Type-A, micro HDMI, microSD, and 3.5mm audio jacks.

Pretech says the system can even support an optional 4G LTE module.

Like most recent 7 inch mini-laptops, Pretech’s tiny computer doesn’t have room for a touchpad, so there’s a small optical touch sensor and two buttons for left and right clicks below the keyboard.