It looks like the leaks/rumors were true. NVIDIA is updating its Shield TV with a new model sporting a faster processor, a new remote control, and a few other improvements.

We’re still waiting for an official announcement from NVIDIA, but the NVIDIA Shield TV Pro is up for pre-order from Amazon for $200 with an estimated ship date of October 28th.

Update: And… the pre-order page is down. I suspect it’ll spring back to life once NVIDIA gets around to confirming the existence of the new Shield TV Pro. 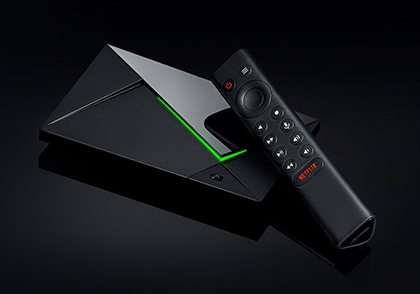 The Shield TV is a funny-shaped box that you can plug into your TV to stream media over the internet and play games. It’s basically the most powerful device running Google’s Android TV software, and NVIDIA has a pretty good track record of bringing new features through regular software updates.

What’s new is a new Tegra X1+ processor that NVIDIA says brings 25-percent faster performance, a new remote control with a weird triangular-shaped design and far more buttons than its predecessor and support for Bluetooth 5.0.

Here’s a run-down of some key specs for the NVIDIA Shield TV Pro, with new features highlighted in bold: