As expected, Microsoft is launching a new thin-and-light Surface tablet powered by an ARM processor and Windows 10 on ARM software.

The Microsoft Surface Pro X is the first and only device to feature a Microsoft SQ1 chipset, which is the company’s name for a custom Qualcomm Snapdragon processor that runs at 7 watts and features a custom GPU and integrated artificial intelligence engine.

Microsoft says the use of an ARM-based chip means the Surface Pro X offers better battery life, a thinner and lighter design, and support for always-connected 4G LTE.

The Surface Pro X goes up for pre-order today for $999 and up and ships in November 5th. 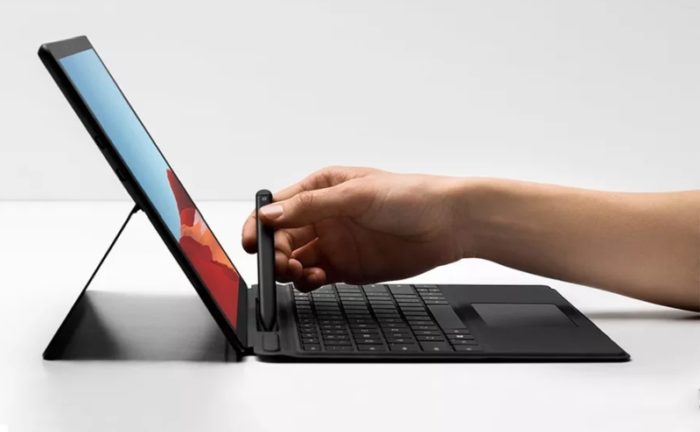 As for the new AI engine, Microsoft says it allows the Surface Pro X to perform some complicated tasks that would otherwise need a 15W GPU while consuming 50 times less power.

The new tablet measures 5.3mm at it thinnest point, and weighs 1.68 pounds. It features two USB-C ports and support for fast charging.

While I know some folks were hoping for a smaller screen, the Surface Pro X actually has a larger display than the Surface Pro 7… but slimmer bezels. Microsoft says the new tablet has a 13 inch display but the same size chassis as the last few generations of Surface Pro.

Other features include support for up to 16GB of LPDDR4x RAM, up to 512GB of storage, an 11MP rear camera, and a 5MP front-facing camera.

Microsoft is also introducing new accessories including a Microsoft Surface Slim Pen with a rechargeable battery with support for wireless charging, plus a new Surface Pro X Keyboard cover that allows you to fold the pen into the hinge and charge it at the same time.

Here’s a run-down of the tablet’s key specs/options:

: Or maybe not — if the Surface Pro X’s “removable” SSD is anything like the one in the Surface Laptop 3, it sounds like Microsoft means “removable by an authorized technician,” and not necessarily by… you.

Update 2: OK, the messaging is a little confusing here. But The Verge confirms that the Surface Pro X has a removable M.2 2230 SSD that you can access by removing the same cover you’d open to get at the SIM card slot. You’ll need a specific Torx screwdriver to remove and replace the drive though.