Intel’s Atom processors made their debut back in the days when small, cheap netbooks were a thing. Neither had a great reputation, and these days you won’t find many PC makers selling anything called a netbook… and Intel doesn’t sell any chips under the Atom brand anymore.

But the company does continue to produce new low-power chips based on Atom architecture. These chips are low-power, low-cost alternatives to the company’s Core series processors. And in recent years we’ve seen plenty of Atom-based Celeron and Pentium-branded chips used in cheap laptops and mini-desktop computers, servers, and other applications where price and power consumption are more important than bleeding edge performance.

Now Intel is getting ready to launch its next-gen Atom architecture, code-named “Tremont.” And while while Tremont chips still aren’t going to be competitive with the latest 10th-gen Core “Comet Lake” or “Ice Lake” processors, they should offer some significant improvements over their predecessors. 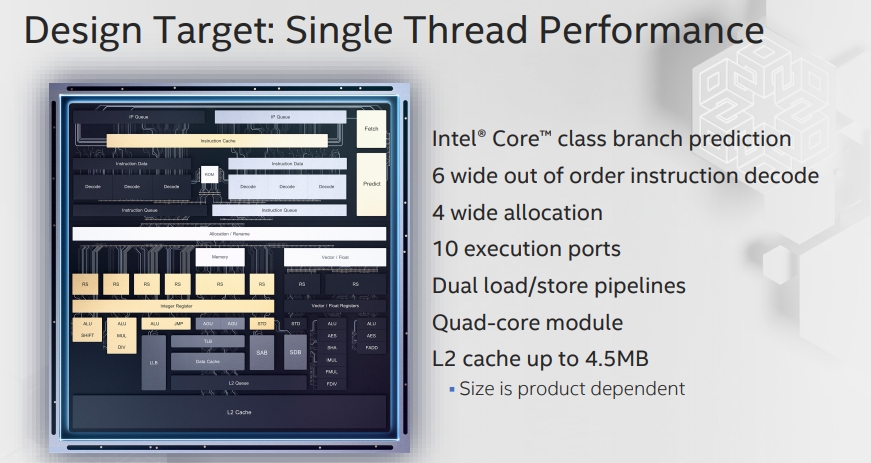 As expected, Intel laid out some details for its upcoming Tremont architecture at the Linley Fall Processor Conference.

The first Tremont chips are coming by the end of 2019. They’re based on Intel’s new 10+ nm  design, and Intel is promising a 30-percent boost in performance compared to its 2017-era Atom chips based on “Goldmont+” architecture.

In fact, Intel says when using small amounts of power, single-threaded performance of a Tremont CPU core will be pretty close to what you’d see from a “Sunny Cove” CPU core like the ones found in the company’s 10th-gen Core Ice Lake chips — although Sunny Cove performs much when power constraints are lifted.

Wondering about graphics performance? You might have to keep wondering for a little while.

The first chip to feature Tremont CPU cores will be Intel’s upcoming “Lakefield” processor, which is actually a hybrid chip that will combine:

Want a deeper dive into Tremont architecture? You can check out the complete slide deck Intel’s Stephen Robinson used at the conference, or check out Anandtech’s in-depth article covering today’s announcement.