The Amazon Kindle Voyage is 5 years old and discontinued… but it’s also still a pretty great eReader. It has a 6 inch, 300 ppi touchscreen display covered by edge-to-edge glass and illuminated by 6 LED lights as well as physical page turn buttons on the right and left sides of the eReader.

Originally priced at $199 when it first launched, this was Amazon’s premium Kindle for enthusiasts until the Kindle Oasis came along a few years later.

The high price made this anything but an impulse purchase… but now that Woot is selling a refurbished model for $70, I’m tempted to pick one up for myself. 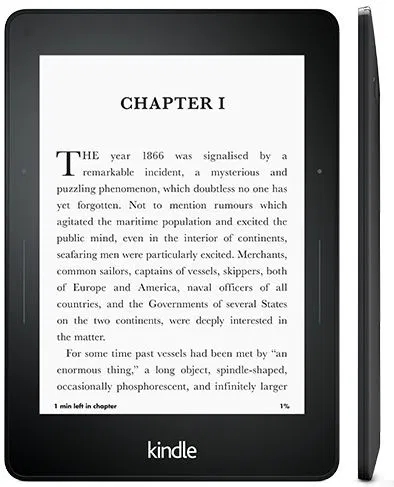 Despite being used/refurbished, the Kindle Voyage comes with a 90-day warranty. And it still has features you can’t find on the latest $130 Kindle Paperwhite model (like page turn buttons and an extra LED).

One thing it doesn’t have? Adjustable color temperature. The only Kindle with that feature is the $250, current-gen Oasis… although if you’re not married to Amazon’s ecosystem, you can pick up a refurbished B&N NOOK GlowLight 3 with a ComfortLight feature for $90.