One of the most popular podcast apps for iOS and Android is now available for free. Previously the Pocket Casts app for Android cost $4, while the iPhone app was $4. Now you don’t have to pay a penny to use either one.

But the company behind the app needs to make money somehow. Enter Pocket Casts Plus, a new subscription service that offers additional features for 99 cents per month or $10 per year. 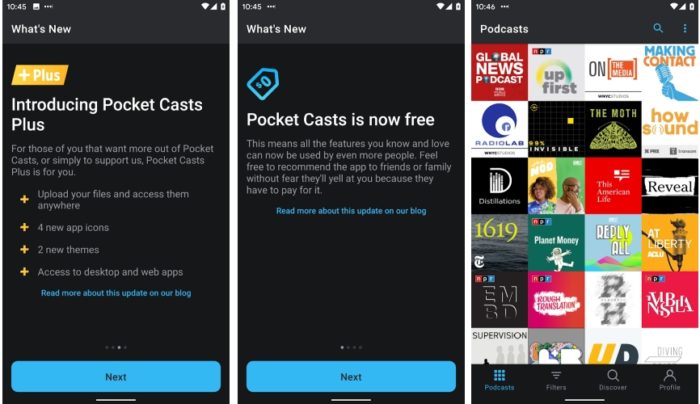 If you already paid for a mobile app, you can continue to use all existing features for free. But a subscription is required to use the Pocket Casts desktop or web apps.

Already paid for one of those? Existing customers will get three years of Pocket Casts Plus for no additional charge.

Update: Unsurprisingly, many folks who had already paid $9 for a Mac, Windows, or web app with the guarantee that it’d be free forever weren’t thrilled with the idea that Pocket Casts would start charging them in three years. So the company has decided to grandfather those customers in — if you had previously paid for a Pocket Casts desktop app, you get a free lifetime membership for Pocket Casts Plus.

Other Plus features include support for exclusive themes and icons, cloud storage, and support for uploading your own audio files so that you can listen to non-podcasts in the Pocket Casts app. That last feature could turn the app into an audiobook player or tool for listening to lectures or speeches. And since your audio is stored online, you can listen on desktop, web, or mobile app.

Or you could just use a standalone app for that. Personally I’m a fan of the Smart AudioBook Player for Android — it doesn’t have a cloud sync feature, but it works pretty nicely for mobile listening thanks to its bookmark, library, and variable speed and volume settings.

Honestly, this is a business model that probably makes more sense for a company that has a product you download once and use indefinitely. But Pocket Casts is competing with free apps like Podcast Addict, so it’ll be interesting to see how many people sign up for Pocket Casts Plus subscriptions.

I’ve been using Pocket Casts since BeyondPod lost the plot a while ago. Right now I’m not seeing much reason to pay for a Plus subscription. But it’s something I’ll likely keep an eye on moving forward to see if there are any new must-have features down the line.