The Lenovo Yoga C640 is a thin and light laptop with a 13.3 inch touchscreen display, a 360-degree hinge, and optional support for 4G LTE if you want a model with always-connected capabilities.

In fact, Lenovo says this is an update to last year’s Yoga 630 which had a Qualcomm Snapdragon 850 processor and built-in LTE. But the new model has a 10th-gen Intel processor rather than a Qualcomm chip, and the LTE is optional… which means that this year’s version also has a lower starting price.

Lenovo says the Yoga C640 will be available soon with prices starting at $579 for a WiFi-only model or $849 for a higher-specced version with cellular capabilities. 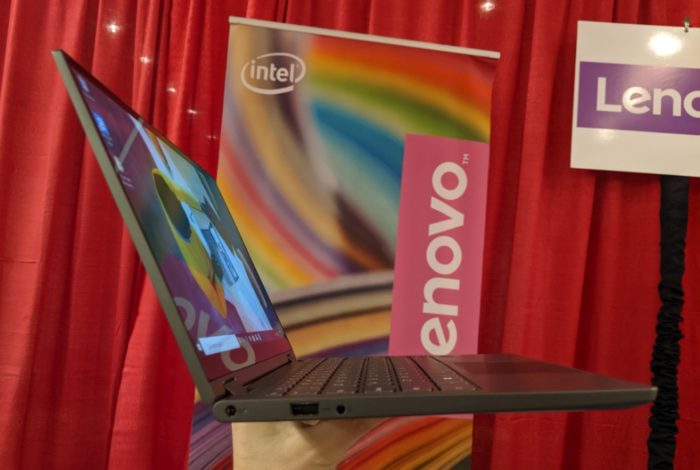 The company isn’t giving up on Windows on Snapdragon — the upcoming Lenovo “Project Limitless” 5G-ready laptop will be powered by a Snapdragon 8cx processor. But since that’s not ready to go yet, let’s take a closer look at the Yoga C640.

It features a mix of mid-range and premium features — there’s an aluminum cover on the lid, but the main body is plastic. There are two USB 3.0 Type-A ports and a USB Type-C port… but no Thunderbolt 3.

And of course, there’s the optional support for 4G LTE, which is a feature you don’t often find on sub-$1000 notebooks.

An entry-level model is likely to be a lot less impressive though — Lenovo says it will offers models with as little as 4GB of RAM, 128GB of storage, and an Intel Core i3 processor.

Other features include a fingerprint sensor, a backlit keyboard, and support for far-field voice detection when you’re using voice assistant software such as Cortana or Alexa. There are also stereo speakers on the left and right sides of the keyboard, where they won’t be blocked if you’re using the computer in laptop, tablet, or tent modes.