Folks have been building portable game consoles and handheld computers out of Raspberry Pi-like single-board PCs for ages. But the designer of the MagClick Case System for the LattePanda Alpha has gone a bit further than most.

Put the little computer in this modular case and you can easily switch between using it as a handheld gaming PC and a desktop-class computer with discrete graphics.

The case is a work-in-progress, DIY project that requires a 3D printer to craft. But there’s the beginning of a tutorial series if you want to try building your own. Eventually the developer may also sell pre-fabricated cases. 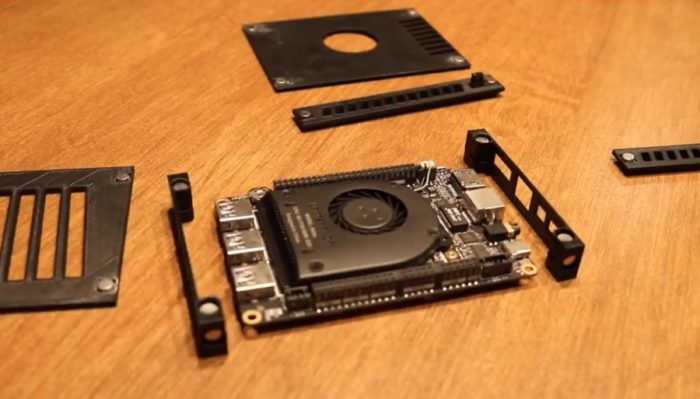 The MagClick case gets its name from the magnets that hold the whole thing together — and which make it relatively easy to attach the computer to other accessories without fully removing it from the case.

So here’s the idea: assemble the MagClick case around the LattePanda Alpha and you can use it as a standalone computer.

Since it’s held together by magnets, you can take off one or more sides without removing any screws, and put it back together the same way. So if you want to attach the LattePanda to the back of a touchscreen display, for example, you can just remove one cover, connect a display cable, and then magnetically click the case to the back of the display.

Add some Nintendo Switch Joy-con controllers to the sides, and you’ve got a portable game system.

Similarly, you can connect the LattePanda to an external graphics card dock by removing one cover, connecting a few cables, and then sticking it to the side of the case. Now you’ve got a home gaming system.

Want a dual-screen laptop? There’s a tutorial for building one of those too.

Theoretically this sort of project should work with just about any single-board computer, allowing you to connect it to peripherals without removing it from a protective case.

But there are a few reasons it makes the most sense to use a LattePanda Alpha.

It packs an Intel Core m3-8100Y processor and 8GB of dual-channel RAM. It supports Windows 10, Ubuntu Linux, and a variety of other operating systems. There’s even an Arduino Leonardo co-processor.

While the entry-level model doesn’t include any storage, a higher-priced model comes with 64GB of eMMC storage, and both models also have M.2 slots with support for optional PCIe NVMe or SATA solid state drives.

In other words, it’s one of the most traditional PC-like of the mini, single-board computers… but it also has a bunch of features aimed at developers/makers.

The computer itself comes with a 45 watt power supply and a cooling fan, and there are also a bunch of optional accessories including cases, displays, and expansion kits.

But the MagClick Case System is cooler than any of them… as long as you don’t plan on dropping the computer, in which case I’d expect the case to come flying apart upon impact.