Intel’s new 10nm “Ice Lake” processors with Gen11 graphics may have kicked off the launch of the chip makers 10th-gen Core processor lineup. But not all 10th-gen chips will be Ice Lake.

The company’s new “Comet Lake” processors chips for laptops, 2-in-1 tablets, and other low-power devices are manufactured using the same 14nm process Intel has been using since launching its “Skylake” chips in 2015.

As Intel ramps up production of 10nm chips, Comet Lake will help the company meet demand for new processors. While says there are 35+ computers with Ice Lake chips on the way, there are 90+ models powered by Comet Lake processors.

In other words we’re going to see more Comet Lake-based PCs this year than models with Ice Lake chips.

Like Ice Lake, Comet Lake chips will be available in U-series (15 watt) and Y-series (7 watt) versions.

While Comet Lake chips may not have all the same features as their Ice Lake counterparts, Intel is promising some significant enhancements over its previous-gen laptop processors.

And the company is trying to justify the existing of two different 10th-gen chips that both look like they’re designed for the same types of devices: thin and light laptops and 2-in-1 tablets.

So while all 10th-gen Intel chips feature integrated support for WiFi 6 (802.11ax) and Thunderbolt 3, here’s the key difference between the two chip families:

In other words, Intel says you should get better gaming, video, and artificial intelligence performance using integrated graphics if you opt for an Ice Lake processor. 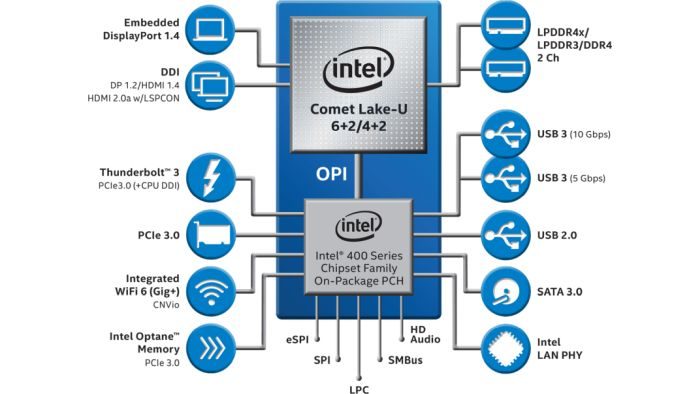 But if you’re going to be getting a system with a discrete GPU anyway, Comet Lake may actually be a better option, since it will offer higher CPU frequencies (at least for some chips).

Intel says Comet Lake brings a roughly 15 to 40 percent performance boost over a year-old computer in some situations… particularly for multitasking performance.

I’m particularly excited to see that 10th-gen Intel Core Y-series chips will now be available with up to 4-cores/8-threads, which should bring a significant performance boost to fanless laptops and 2-in-1 tablets as well as next-gen mini-laptops from companies like GPD and One Netbook (the latter has already announced it’s working on a device with a 10th-gen Intel processor).

Anyway, so now there are two chip families that share the 10th-gen name. In a nutshell one offers better CPU performance and the other offers better graphics. But how do you tell the chips apart at a glance?

Theoretically all the info you need is in the model numbers. But it’s a bit confusing.

The U and Y tell you about the power consumption — U is aimed at mainstream thin and light laptops, while Y is designed for 2-in-1 tablets, ultraportable systems, and fanless computers.

But while Ice Lake chips are divided into U and Y families, you won’t see those letters in the name. Instead you have to look at the second set of numbers.

Finally, the G in the Ice Lake chip names stands for graphics, so you can look to the last number to figure out what kind of GPU a chip has. The higher the number, the better the graphics.

Here are some examples:

Confused yet? Here are some graphics that might help (a little):