But the company is also introducing new Clamshell-style versions that will be much more affordable, with prices starting at under $900 (compared with $1400+ for the Black Edition). 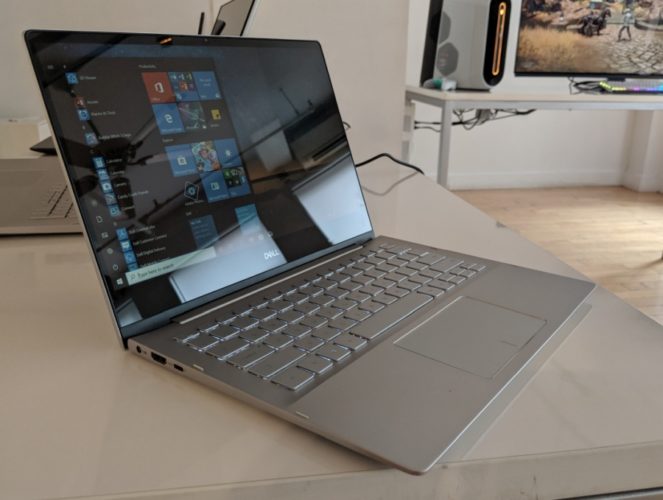 While the bezels aren’t quite as slim as those on the Dell XPS 13 line of ultraportable notebooks, the Inspiron 13 7391 still has a pretty decent screen-to-body ratio, while still making room for a webcam above the display.

The notebook supports up to  an Intel Core i7-10510U Comet Lake processor, up to 1TB of PCIe NVMe storage, and it has optional support for NVIDIA Geforce MX250 graphics and an optional fingerprint reader in the power button.

Once decidedly un-premium feature? Dell will only offer the notebook with up to 8GB of LPDDR3-2133 memory.

Other features include a spill-resistant backlit keyboard, HDMI 1.4b, a USB-C port, a USB 3.1 Gen 1 Type-A port, a microSD card reader, and a headset jack. The Inspiron 13 7391 will be available with 45 Wh and 52 Wh battery options.

Dell doesn’t include a pressure-sensitive pen with this model, but a representative tells me that the notebook will support a Surface Pen or any other digital pen that uses the Microsoft Pen Protocol.

The Dell Inspiron 13 7391 laptop will be available starting October 1st, along with a 15 inch model with similar specs and an $850 starting price.

Or you can opt for the Black Edition laptops if you want premium features including a 4K touchscreen display, a 360-degree hinge, Thunderbolt 3 ports, and the inclusion of a pressure-sensitive pen (and magnetic pen garage for storing the stylus in the hinge when it’s not in use). You’ll just end up paying a lot more for one of those models.