The CutiePi is hardly the first tablet built around one of Raspberry Pi’s tiny, low-cost computers. But it’s a pretty nifty looking addition to the category that combines an 8 inch touchscreen display with a Raspberry Pi Compute Module 3 Lite, a custom carrier board, and software to make the Linux-based Raspbian operating system touch-friendly.

CutiePie’s developers have a working prototype and hope to begin selling the tablet later this year. But the whole project is open source, so anyone who wants to build their own can check out the code and hardware design files and give it a try. 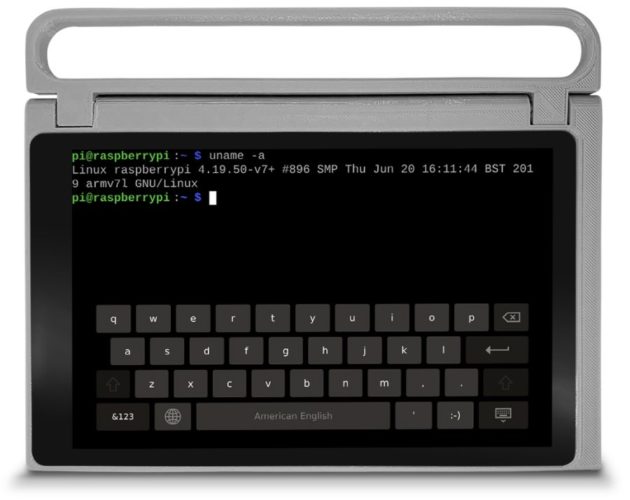 By using a Raspberry Pi Compute Module and carrier board rather than a full-sized Raspberry Pi, the developers say they were able to keep the tablet thin.

The developers have also built a touch-friendly user interface using Qt (say it out loud and the “CutiePi” name makes sense). The UI includes a virtual keyboard and support for touch-based gestures including pinch-to-zoom, allowing you to get stuff done without the need to plug in an external mouse, keyboard, or any other hardware.

While the prototype appears to be a touchscreen display connected to the carrier board, images on the CutiePi website show a small tablet with a built-in carrying handle that can be folded to function as a stand.

All of those specs are subject to change, and the folks behind this project aren’t ready to announce a price yet. But the goal is to start selling the CutiePi by the end of 2019.

You can read a little more about the project in the Raspberry Pi forums.

6 replies on “CutiePi is an open source Raspberry Pi-based tablet (coming in late 2019?)”