A few months ago Mason Stooksbury crammed the guts of an old PC into an old printer and created a franken-PC called the Comprinter.

The only catch? The printer was broken, so the project looked cool, but couldn’t actually print anything unless you connected a different printer.

Now Stooksbury is back with a Comprinter II, and this time… it prints. It also glows, thanks to the addition of an LED light strip. 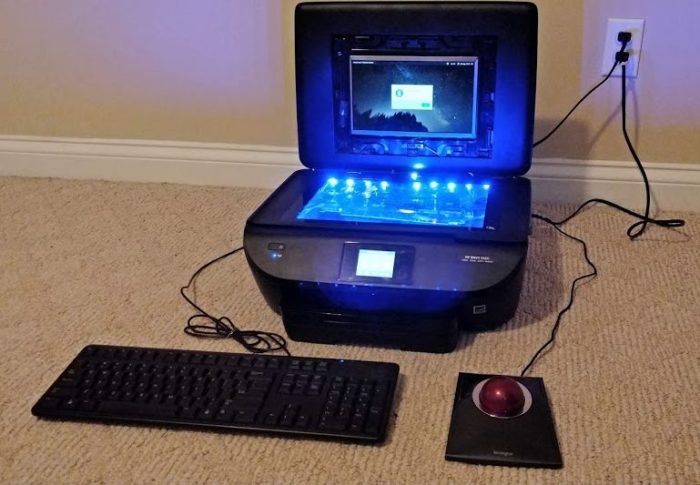 The end result is a PC that looks like a printer when the flatbed scanner lid is closed. But lift it up and you’ll see a 10.1 inch, 1024 x 600 picel LCD display salvaged from the netbook.

Under the hood, the system features an Intel Atom N550 processor, 2GB of RAM and a 250GB hard drive. The guts of the system lie below the glass of the scanner, which means the scanner’s not usable, but you can see the motherboard while using the PC.

Stooksbury also drilled holes in the side of the printer for Ethernet, USB, and audio ports, plus an SD card reader. And he extended wires for antennae, the webcam, and other components to make them usable.

The system runs Xubuntu 18.04 Linux, and you can actually use the printer. In fact, you don’t even need to print from the built-in (or maybe crammed-in) computer, since it supports printing from an SD card or wireless printing.

You can find more details about this DIY computer/printer project, plus a link to a gallery of images showing the build process, at Stooksbury’s website.