The Asus ZenFone 6 is a smartphone with with a Qualcomm Snapdragon 855 processor, 6GB of RAM, a 5,000 mAh battery, and an unusual camera system. Thanks to a 180-degree rotating camera system, you use the same dual-cameras whether you’re snapping selfies or normal shots.

First unveiled in May, the ZenFone 6 is now up for pre-order in the US for $500 and up with support for GSM networks including AT&T and T-Mobile. 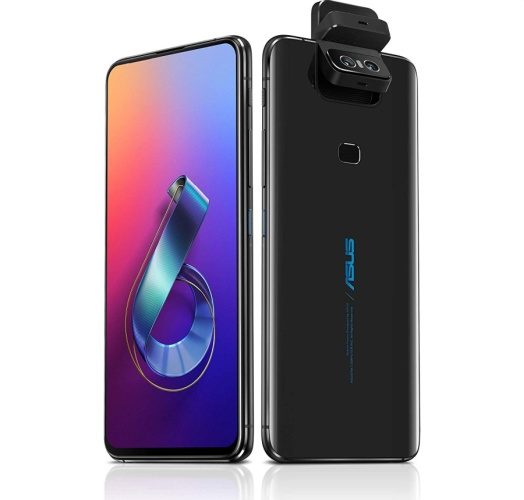 That’s a pretty competitive price for a smartphone with flagship-level specs, but I suppose you could debate whether the ZenFone 6 is a true flagship.

While it has a slim-bezel design and one of Qualcomm’s fastest smartphone chips to date, it sports a 6.4 inch 2340 x 1080 pixel IPS LCD display, fingerprint sensor on the back of the phone, a headphone jack and  microSD card reader.

Those last two features aren’t exactly bad things — in fact, I often see people lament that more flagships don’t have them. I’m just saying, they seem to be endangered species on flagships these days.

More egregious might be the decision to opt for a FHD+ LCD display rather than a higher-resolution AMOLED screen. But reviewers don’t seem to have much of a problem with the display, particularly for a phone at this price point.

The phone’s most distinctive feature is certainly the camera system, which pairs a 48MP Sony IMX586 image sensor with a 13MP, 125-degree wide-angle camera. It’s not the highest-rated smartphone camera around, but it seems to be pretty good. And since the camera flips 180 degrees to face forward when you’re shooting a selfie or making a video call, you never have to worry about choosing between the front camera and the “good” camera on the back of the phone.

via Android Central and Amazon