As promised, the folks at Unihertz have launched a crowdfunding campaign for their upcoming BlackBerry clone.

The Unihertz Titan features a big battery, 6GB of RAM, and Android 9.0 software. But the key thing that makes this phone stand out is the keyboard — it has a BlackBerry-style physical keyboard beneath a square display.

Unihertz says the suggested retail price for the smartphone will be $359, but folks who back the company’s Kickstarter campaign can save $100 or more. The company plans to begin shipping the phone in December 2019. 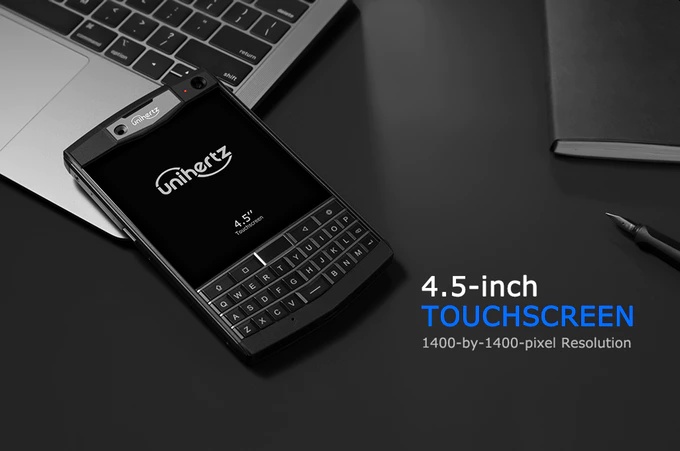 The smartphone features a 4.5 inch, 1440 x 1440 pixel square touchsrceen LCD display, a MediaTek Helio P60 octa-core processor, 128GB of storage, a USB-C port, wireless charging support, and you can either use dual SIM cards with the phone or a SIM card + microSD card.

It features IP67 dust and water protection, and Uniherts says the phone is also shockproof, making it appropriate for use in a variety of situations.

Other features include a 16MP camera on the back and an 8MP camera on the front, and the Unihertz Titan supports 802.11ac WiFi, Bluetooth 4.1, NFC, and FM radio. There’s also a push-to-talk “walkie talkie” function mapped to a button on the side of the phone. But if you want to remap the button to do something else, you can also do that.

There’s a fingerprint sensor below the screen and the smartphone also supports face unlock.

Thanks to its built-in keyboard and fairly large top bezel, the smartphone sort of bucks the recent trend toward all-screen devices in a big way — but I suspect that’s a selling point for some folks.

Unihertz appears to have drawn a lot of inspiration for the keyboard from BlackBerry’s recent designs. In addition to sporting physical keys that you can press to enter text, the surface of the keyboard is touch-sensitive, allowing you to use the whole thing like a touchpad.

The keys are backlit to help you type in the dark. And in addition to physical home, menu, and back buttons, there’s a Shift/Caps Lock key in the top row.

Unihertz says the phone offers “global” LTE support, but it looks like Verizon and Sprint customers need not apply — the smartphone supports GSM mobile networks including AT&T and T-Mobile.