When One Netbook released the One Mix Yoga 7 inch laptop with a touchscreen display, a convertible tablet-style design, and pen support about a year ago I was impressed with the design, but underwhelmed by the performance.

Then the company released the One Mix 2 Yoga, which had a similar design but better specs, much better performance… and a higher price tag.

This year the company added the One Mix 3 Yoga to the lineup. With an 8.4 inch display, the new model is the largest to date, but it also has the best keyboard. I like it a lot. But… you guessed it, the 3rd-gen model costs more than its predecessors.

Enter the One Mix 1S Yoga. This new model is basically an update to One Netbook’s first mini-laptop. It has the same basic design but it add a much speedier processor, significantly faster storage and a fingerprint sensor (although it loses the backlit keyboard).

Best of all, it’s priced like the first-gen model. GeekBuying is currently taking pre-orders for the One Mix 1S Yoga for $440 and up (and Liliputing readers can save $10 if you use the coupon 3ZQUXJGU at checkout).

Update: Here’s a peek under the hood: 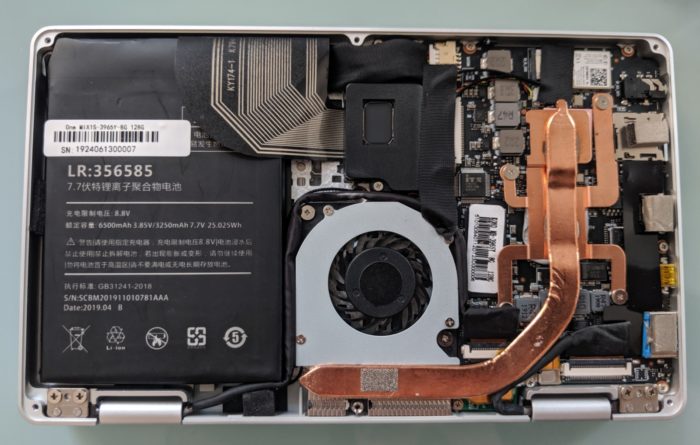 The One Mix 1S has a 3250 mAh, 25.025 Wh battery, a fan, heat pipe, and mono speaker (near the center of the front of the laptop). It doesn’t look like the SSD is replaceable, but based on my speed tests I can confirm that the little laptop does have an SSD rather than slower eMMC storage.

The folks at One Netbook sent me a demo unit to test, and while I’m not ready to pass a final verdict just yet, I’ve performed some benchmark tests and done a side-by-side comparison with the One Mix 3 Yoga.

In a nutshell, it’s a big upgrade over the original One Mix Yoga… but unsurprisingly it doesn’t offer the same level of performance you’d expect from a One Mix 2 or One Mix 3 series device.

First up, let’s compare the One Mix 1S with its predecessor — the original One Mix Yoga featured an Intel Atom x5-Z8350 “Cherry Trail” processor and sluggish eMMC storage.

The new model has an Intel Celeron 3965Y processor based on 7th-gen Intel “Kaby Lake” architecture. It’s one of the least powerful Kaby Lake chips you can find — it’s a 1.5 GHz dual-core chip with no support for hyperthreading or burst speeds. And the version used in this laptop seems to have a TDP that tops out around 7 watts.

But those upgrades make a pretty big impact on real-world performance: this is hardly the snappiest computer I’ve used, but it doesn’t feel painfully slow like the first-gen model.

In terms of benchmarks, you can see that the data read/write speeds are much faster in the CrystalDiskMark scores: 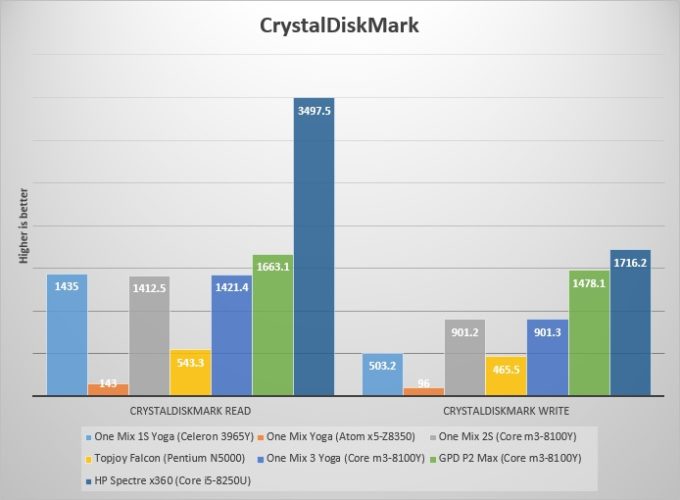 And the PCMark score for the new model is more than twice as high: 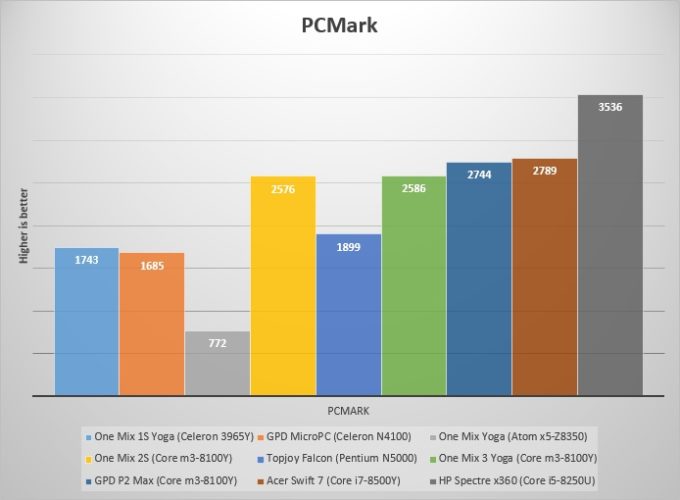 3D graphics tests also make it clear that the new model is in a different class. The Celeron 3965Y chip features Intel HD 615 graphics, making it much more suitable for (some) gaming tasks.

That said, the One Mix 1S isn’t nearly as fast as a computer with an Intel Core m3-8100Y or better chip… which makes sense, since if you threw one of those processors in this little computer you’d basically have a One Mix 2S Yoga, which sells for almost $300 more.

What is a little more surprising is that the Intel Celeron N4100 Gemini Lake processor found in devices including the GPD MicroPC handheld computer is pretty competitive with the Celeron 3965Y.

The GPD MicroPC scored higher in some CPU tests than the One Mix 1S — particularly tests that involved multi-core performance (the N4100 is a quad-core chip). But the Celeron 3965Y still seems to be a better choice for 3D graphics.

Overall the One Mix 1S seems like a pretty nice upgrade — the only down side is that in exchange for the new processor and the fingerprint sensor, you lose the backlit keyboard.

I hope to have some more details to share about battery life, Linux performance, and other use cases in the future.

vs One Mix 3 Yoga

For now, let’s move on to a comparison with the One Mix 3 Yoga, the new 8.4 inch model from One Netbook. In addition to a larger display, it has a larger keyboard which makes typing much easier… but it’s also a bigger notebook that weighs more, takes up more space, and costs most — it sells for $760 at GeekBuying (but you can save $10 with the coupon BELWFNVY). 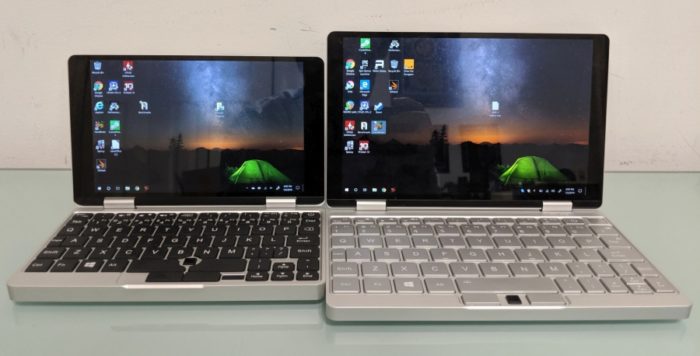 The One Mix 1S and One Mix 3 Yoga actually have the same selection of ports (USB-A, USB-C, micro HDMI, microSD, and audio jacks), but the larger laptop has some of those ports on each side of the computer, while the smaller model has all the ports on one side. 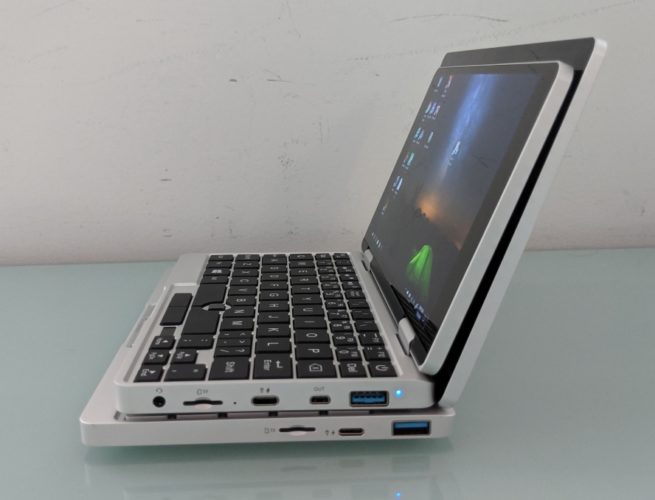 The One Mix 3 Yoga has a backlit keyboard with larger keys, better spacing between them, and room for status LED lights above the keyboard. The One Mix 1S only has a single LED on the side where it’s harder to see).

One Netbook has placed the fingerprint sensor in the upper right corner of the keyboard area for the One Mix 3 Yoga, and it’s larger than the tiny sensor on the One Mix 1S.

While I don’t love the layout of the keys on the smaller model (the punctuation marks are too close together which makes it hard to pick the correct one without looking), as demonstrated (much to my surprise) sometimes I can type pretty quickly on the smaller keyboard. It’s just not as comfortable. 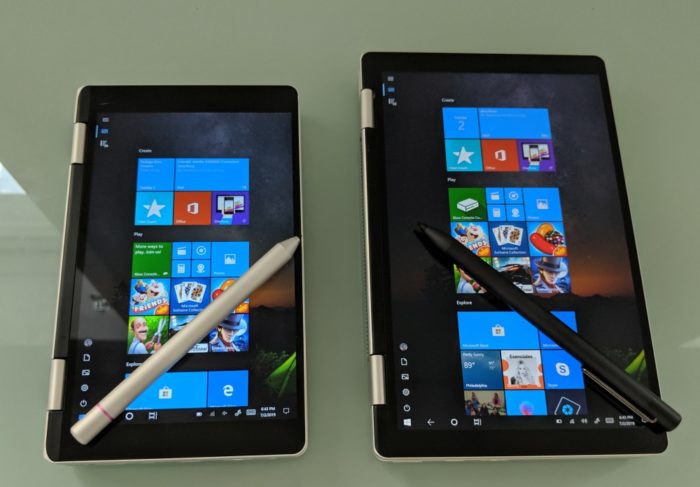 Another difference between the two little laptops? While they both support optional pressure-sensitive pen input, the One Mix 3 Yoga supports Microsoft Pen Protocol, which means you can use a Surface Pen or similar device. The One Mix 1S uses a Goodix pen.

Since I have both little laptops on my desk at the moment I was able to confirm that the two pens are not interchangeable.

One thing that is the same for both? One Netbook ships a 30W AC adapter and a braided USB-C charging cable with both models.

So how do you choose between these two little laptops? Right now I’d have to say the One Mix 3 Yoga is a better choice if you need the additional processing power, an easier-to-use keyboard, and don’t mind spending iPad Pro-like prices for a mini laptop.

On the other hand, the One Mix 1S might appeal to folks who prefer something smaller — at less than 1.2 pounds, it weighs less than the 1.5 pound One Mix 3 Yoga and it’s small enough that you might actually be able to fold it up and slide it into a pants pocket.

It’s also one of the most affordable mini-laptops on the market right now, with a starting price of $430 when you use the coupon 3ZQUXJGU at GeekBuying.