Google’s Pixel smartphones have always come in two sizes: regular and XL. But while the first-gen Pixel and Pixel XL looked virtually identical, Google changed things up for the Pixel 2 and Pixel 3 series phones, with the larger models featuring slimmer bezels and/or camera notch designs.

This year it looks like Google could go back to offering a unified design.

A set of leaked images published by iGeeksBlog and @OnLeaks give us our first look (allegedly) at the Google Pixel 4, and it looks virtually identical to the Pixel 4 XL images we’ve already seen.

The only real difference is that the Pixel 4 is expected to feature a 5.6 inch display and a smaller body, while the Pixel 4 XL has a 6.3 inch screen. It’ll also probably have a larger battery. 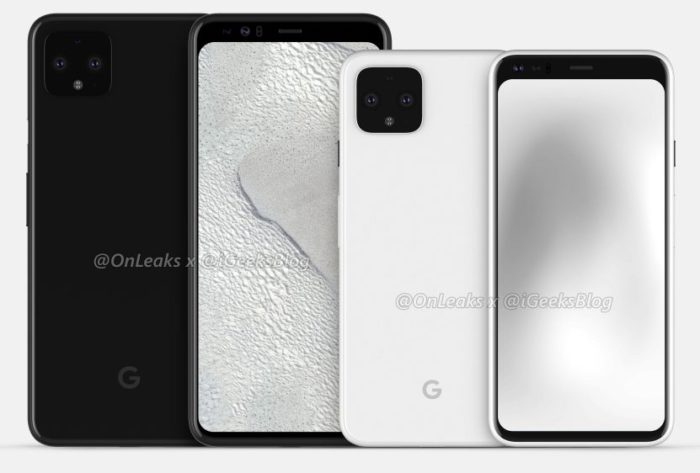 None of that is too surprising, since Google already shared a teaser image of the Pixel 4 in June. But that picture only revealed the back of the phone.

If the new images are accurate, they give us our first look at the front, and it appears that both the Pixel 4 and Pixel 4 XL will have slim bottom bezels and slightly larger top bezels with dual cameras, a top speaker, and two sensors.

It’s unclear what those sensors are for, but there’s been plenty of speculation that they could be related to Google’s Project Soli technology which would use a tiny radar system to enabled touch-free gestures, allowing you to interact with a phone by moving your hands and fingers near the screen. Google has been demonstrating Soli for more than four years at this point, but it has yet to ship in any commercial products.

As expected, the back of the phones appear to feature square cameras bumps with dual cameras, a break from Google’s usual approach. While the Pixel phones have always had some of the best smartphone cameras available, Google has largely relied on software for things like bokeh-styled photography and “super res zoom.” But perhaps the addition of a second camera could be an indication that Google will be adding a wide-angle lens or a telephoto zoom lens.

According to iGeeksBlog, there’s also a ToF sensor on the rear camera panel.

One thing that’s not visible in the rendered images? A fingerprint sensor. Every Pixel phone to date has had one on the back of the phone, and the absence of one this time around could suggest that Google is opting for an in-display fingerprint reader or dropping this biometric security method altogether in exchange for a face recognition system similar to Apple’s Face ID.

Oh, and there’s no headphone jack unless you count the phone’s USB-C port. But you weren’t really expecting one, were you?