That’s not going to happen. But the company has been showing off working prototypes at recent events in London, Tokyo and Düsseldorf. And the company is asking folks who have placed pre-orders to register if they’re interested in applying to be beta testers. So it looks like the smartphone could still be on track to ship sometime this year.

In fact, one attendee of the community event in Germany says F(x)Tec plans to begin charging folks who have registered to pre-order soon, and that the phone could ship in September (although I’m not going to hold my breath). 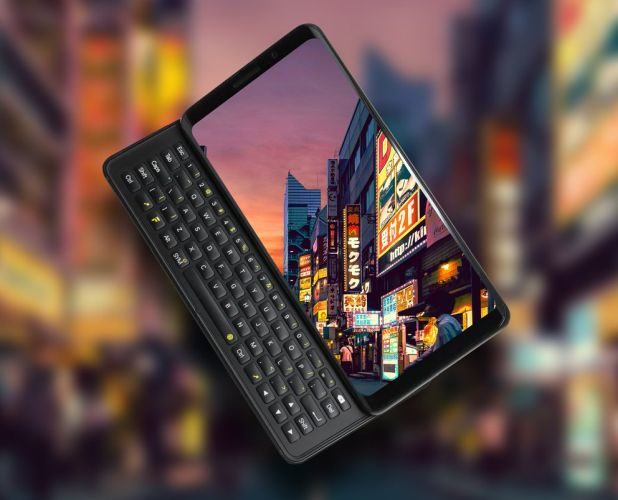 All told, the F(x)tec Pro 1 seems to be a pretty impressive device considering the fact that it’s coming from a startup rather than a well-established phone maker.

F(x)tech actually started as a team working on the Livermorium keyboard Moto Mod for Moto Z smartphones, but the group eventually scrapped that project to work on a standalone phone.

The result is a device that’s designed to work either as a touchscreen device or as a handheld gadget with a keyboard featuring backlit, physical keys that don’t block the screen while you’re typing. Unlike BlackBerry phones, the physical keyboard is hidden when you don’t need it, giving you more screen real estate. And when you are using it, the screen is tilted at a 25 degree angle to the keyboard so you can type while holding the phone in your hands or placing it on a table or desk.

The phone is expected to ship with Android 9 Pie, with an update to Android Q on the roadmap. But the bootloader will be unlockable and the phone will also support alternate operating systems including Sailfish OS and LineageOS.

Other geeky/power user features include a USB port that’s on a separate board so that it’s easy to repair or replace without the need to replace the entire motherboard. The battery isn’t officially removable, but apparently you can access it by removing a few screws from the back of the phone.

The F(x)tec Pro 1 is priced at $649, which seems reasonably affordable for a modern flagship… but it’s a matter of debate whether this is a phone with flagship specs. What you’re actually buying if you opt for this phone is a device aimed at folks who really want a smartphone that combines the experience of a touchscreen-only device with the added benefits of a physical keyboard… and who are willing to invest in a product from an unknown startup in order to get that experience.

That’s a somewhat risky proposition at this point — startups don’t exactly have a great track record of delivering and supporting smartphones that can match what you’d get from bigger phone makers. One possible exception might be the Essential PH-1, a phone from the startup created by Android co-founder Andy Rubin. That phone continues to receive monthly Android updates the day Google releases them… but almost two years after launch, Essential has yet to release another phone.

Honestly, it’s only the processor that seems dated — and the Snapdragon 835 isn’t a bad chip by any means. I’m not itching to replace my Pixel 2 anytime soon. But I’d have a hard time justifying paying $649 for a brand new phone with that same processor today if it didn’t have some other amazing features to make it attractive. Maybe the keyboard fits that description for enough folks for this phone to be a commercial success?

For now, here’s an in-depth hands-on from Tim Weber, who got to spend some time with the F(x)tec Pro 1 in Germany last week. There are English subtitles for folks who don’t understand German.