As expected, the second gaming smartphone will be one of the most powerful Android phones to date.

It also has a massive 6,000 mAh battery to keep the phone running, ant support for 30W fast charging so you can refuel the battery in a hurry.

Oh, and it has a headphone jack.

Asus hasn’t announced global pricing details yet, but the ROG Phone II will go on sale in China this week, along with a bunch of optional accessories aimed at gamers.

Update: The ROG Phone II is up for order in China with an 8GB/128GB model selling for about $510, and a 12GB/512GB model going for about $870. It’ll likely cost a bit more if and when it makes it to Europe and North America. 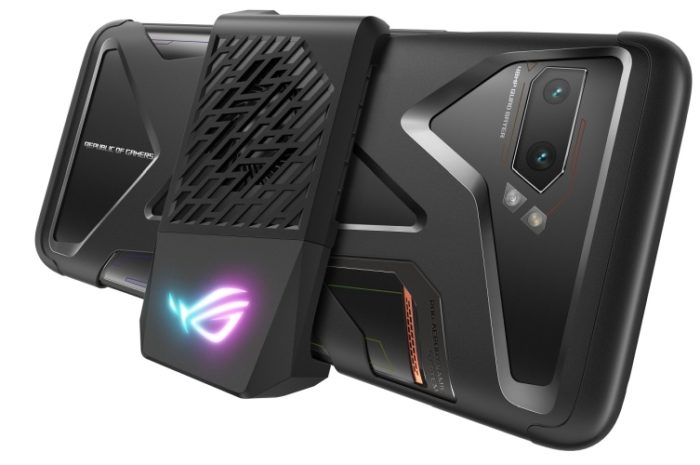 While the phone has impressive specs, I think it’s these optional accessories that really make the ROG Phone stand out from other so-called gaming phones, which aren’t really all that different from standard smartphones.

The accessories make use of the fact that this phone has two USB ports: a USB 2.0 Type-C port on the bottom for charging, and a second USB 3.1 Gen 2 Type-C port on the side that supports 30W fast charging and DisplayPort 1.4 output.

Accessories include docking stations for connecting a display and USB accessories, cooling accessories, an updated version of the TwinView Dock that gives you a second screen when using the ROG Phone II in handheld mode, a new ROG Kunai Gamepad that puts physical game controller buttons on the left and right sides of the phone, and a ROG Lightning Armor Case with LED lighting on the back.

Asus says it’s also improved the heat dissipation in its second gaming smartphone, allowing it to run at top speeds longer than other phones — but a side effect of the big battery and improved cooling is that this is a pretty big phone. It has a bigger screen than the 6 inch first-gen ROG Phone, but it’s also thicker and heavier, measuring almost 0.4″ thick and weighing slightly more than half a pound.

via xda-developers, AnandTech, and Android Police