The upcoming Playdate handheld game console has a few nifty things going for it, including a well-known design team, a promise of at least one “season” of 12 new brand new games delivered one per-week for three months, and… a hand crank that introduced a new way to play mobile games.

But the Playdate isn’t expected to ship until early next year, and with a $149 price tag it’s not exactly going to be the most affordable mobile gaming device around.

So Arduboy creator Kevin Bates decided to see if he could build his own portable game console with a hand crank by adding one to his $49 open source game system. TL;DR – he could. 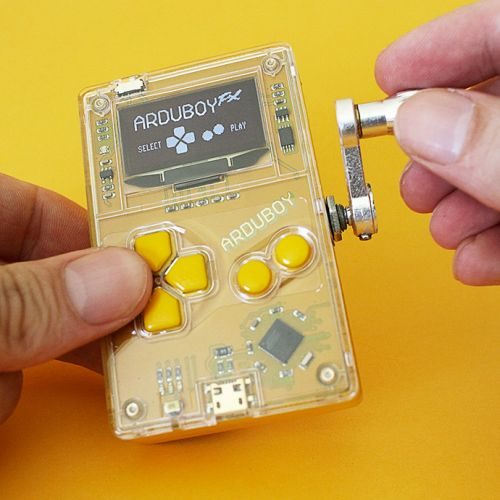 The project involved connecting a small hand crank to a rotary encoder switch for use as an input device, and attaching it to the side of the little Arduino-powered gaming device.

Perhaps more impressively, Bates modified the source code of some existing games to make them playable using the crank. It can also control playback speed (and direction) of a movie based on an animated GIF.

Bates currently has no plans to sell any Arduboys with hand cranks. But he has shared the schematics for anyone that wants to try building their own,

The project also shows both the versatility of this $49 handheld gaming device, and the potential of a hand crank as a gaming input device.

Incidentally, this isn’t the first time we’ve seen an Arduino-powered handheld game system with a hand-crank. Adafruit assembled a rudimentary one in May and used it as an animated GIF player.

In other Arduboy-related news, Bates has announced plans to offer free Arduboys to teachers for user in classrooms. He’s also encouraging members of the Arduboy community to help develop a curriculum that teachers can use to help students learn to code games for the platform… or rather to create more lessons, since there are already a few tutorials at the Arduboy community site.