The Smach Z is a handheld gaming PC with a 6 inch, 1920 x 1080 pixel touchscreen display surrounded by game controllers on the left and right sides. It’s powered by an AMD Ryzen Embedded V1605B processor with Radeon Vega graphics. And it’s been in development for a very long time.

But Smach says the handheld computer is on track to ship this year, and the company has been showing off videos of functional prototypes for the past few months.

Now the Smach team says it’ll be showing off the final hardware at the E3 video game conference in Los Angeles next week. 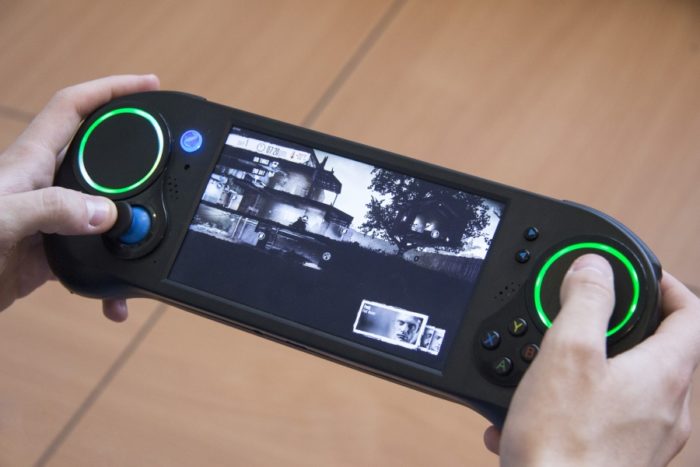 The company has also released one more preview video showing clips of several different games running on the Smach Z. While it’s a little tough to say anything about performance or frame rates based on a 30-second video, you can at least get a sense of what it looks like to play games on a handheld PC that looks more like a PlayStation Portable than a typical laptop or tablet computer.

Smach is still taking pre-orders for the Smach Z for $629 and up:

Other features include USB Type-C, Type-A, and micro USB ports, DisplayPort, and a microSD card reader.

The company says users should be able to get 2 to 7 hours of battery life while gaming, depending on the titles they’re running. You can fully charge the battery by plugging the Smach Z in for 45 minutes.

Given the Smach Z’s history, I wouldn’t blame anyone for remaining skeptical until this thing is actually shipping. But it’s nice to see that the company is at least ready to show off the final hardware design in person starting next week. If anyone’s stopping by E3 and has a chance to check it out, let us know what you think in the comments!