The One Mix 3 Yoga is a compact laptop with an 8.4 inch display and a 5 watt Intel Core m3-8100Y processor. It’s designed for portability more than bleeding-edge performance… but it’s actually a surprisingly capable laptop for most day-to day tasks.

It has one of the best keyboards of any sub-10 inch laptop I’ve tested in recent years, and the little laptop’s dual-core processor and 8GB of RAM are enough to handle most day-to-day tasks — in fact I spent most of the day today using the One Mix 3 Yoga as my work computer (while plugged into an external display and speakers).

Then I unplugged it, rebooted it, and decided to run some benchmarks. While this little laptop isn’t in the same league as a notebook with a 15 watt Intel quad-core U-series process and/or discrete graphics, it more than holds it own when pitted against other mini laptops that have hit the streets in the last year or two. 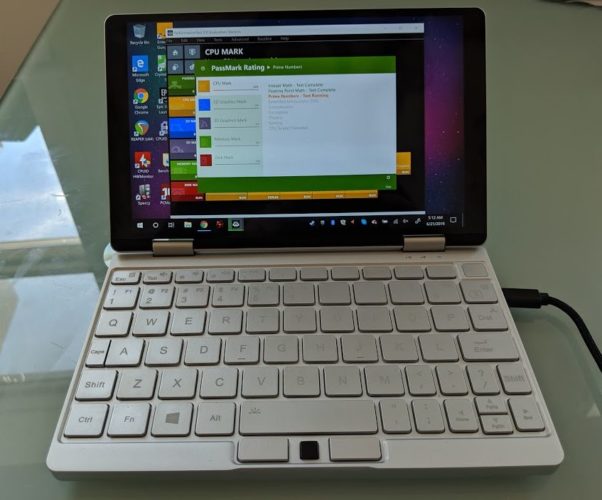 Case in point: the One Mix 3 Yoga scored a little lower than the Acer Swift 7 laptop with an Intel Core i7-8500Y processor in single-core performance in the GeekBench test… but actually scored higher in the multi-core test.

You can probably chalk that up to the fact that the Acer Swift 7 is fanless, while the One Mix 3 Yoga is not. 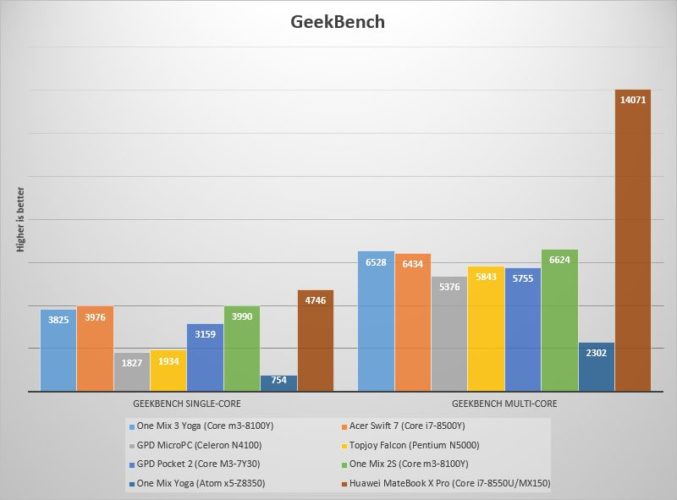 Sure enough, when I disabled the fan, the single-core score was 3842, but the multi-core score dropped to 6285… which is still pretty good considering this laptop sells for less than half the price of the Acer Swift 7.

Unsurprisingly, the Huawei MateBook X Pro with an Intel Core i7-8550U processor and NVIDIA GeForce MX150 graphics trounced all of the mini laptops with lower-power components… although the single-core performance wasn’t  all that much higher.

I also ran PCMark, 3DMark, Cinebench, and CrystalDiskMark on the One Mix Yoga and compared results from scores for comparable devices from the Liliputing review archives.

You can check out some of those scores below. There’s nothing too surprising — overall the scores for this mini-laptop are pretty close to what I recorded last year for the even more-mini 7 inch One Mix 2S Yoga. That makes sense since the two notebooks have similar internals. But the new model has a larger, higher-resolution display and a bigger keyboard that makes touch-typing a lot easier.

The One Mix 3 Yoga is up for pre-order from GeekBuying for $760 and up (and you can save $10 when using the coupon code BELWFNVY).

15 replies on “One Mix 3 Yoga benchmarks”